The advocates are attending seminars with Trek’s marketing, engineering, design, retail, manufacturing, and product development teams. During the three-day summit, advocates are shown how to strengthen the relationship between women riders and retailers in their hometowns.

Since its creation in 2016, the programme has doubled in size with this years’ event hosting 104 "Trek Women’s Advocates" from partner retailers and Trek stores in their respective communities.

"Advocacy for women’s cycling is a grassroots effort," said Trek’s global women’s marketing manager Emily Bremer, "and this program is making a true impact on communities across North America. We see this in the growing number of women joining the sport where our advocates are placed."

The 104 Trek Women’s Advocates were chosen from over 300 applicants.

"With the continued growth of this program and more advocates in the field," said Bremer, "now even more communities will benefit from the passion and enthusiasm of our advocates.”

The company recently launched a women’s professional road team and next month will host the second annual World Cup Waterloo, an elite cyclocross race which is first World Cup cyclocross event to offer prize purse parity between the sexes. 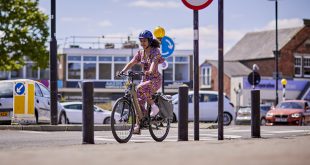