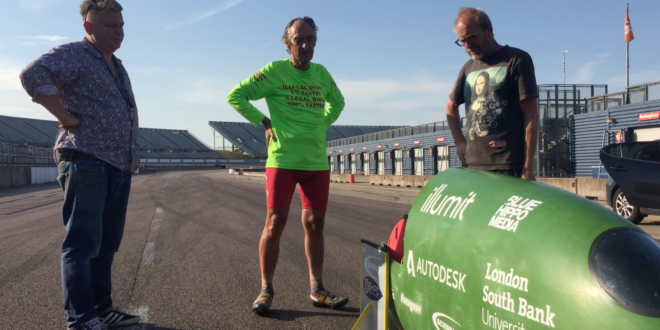 A film crew is following cycle design guru Mike Burrows in the run-up to his attempt to break the human-powered-vehicle speed record next month in Nevada. And Blue Hippo Media is seeking sponsors for the film, with backers getting logo placements on the bike and in the documentary itself.

The current world record for a human powered vehicle, or HPV, is a touch over 89mph. The 75-year-old Burrows believes he will be able to pedal his machine on the flats of Battle Mountain in Nevada to 93mph. (The speed is measured over a 200-metre stretch of a five-mile course.)

The Washington Post Magazine, in 2001, named the out-of-the-way Battle Mountain as the "Armpit of America" – an insult that, ironically, led to increased tourism, although there’s truly not much to see in town. No battle ever took place there, and the nearest mountain is many miles distant. However, what the town lacks in tourist delights, historicity and topography it makes up for in having one of the world’s flattest, straightest and now smoothest roads (it was resurfaced in 2009, with buttery asphalt specially prepared for HPV racing using a grant from the US government).

State Route 305 outside of town is the annual venue for the World Human Powered Speed Challenge, and this year’s event will be the nineteenth. At the first event in 2000, Briton Sam Whittingham reached 72.74mph. In 2016, Canadian aerospace engineer Todd Reichert of Team Aerovelo achieved the current speed record of 89.59mph, tantalisingly close to the magic 90mph.

This year’s World Human Powered Speed Challenge will be held in Battle Mountain between September 10th and 15th.

Burrows has been designing bikes and HPVs since the 1980s. His rise to prominence came when Chris Boardman rode the Burrows-designed Lotus Superbike to win Olympic gold on the Barcelona track in 1992, the pivotal event which was the springboard for the current British success in cycle sport.

Blue Hippo’s film crew has been following Burrows and Thompson for some months, and a feature documentary about the attempt will be released next year. Sponsors will get logo space on the bike’s fairing, crew apparel as well as airtime on the film’s credits. The top-level of backing costs £12,000 with a number of other slots available for £3,000.

Alongside the main feature, Blue Hippo Media is also planning on producing a series of educational films featuring Burrows’ attempt on the speed record.