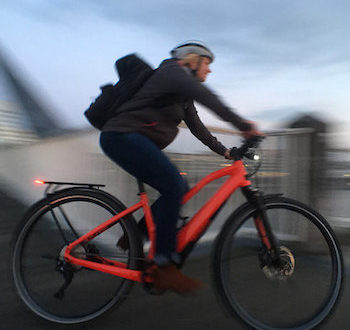 Specialized has released its latest e-bike, and the UK and US trade press got to see it up close and personal at a launch event held in Germany last week. BikeBiz – that’ll be me – and Bicycle Retailer – that’ll be Val Vanderpool – were equipped with bright red Turbo Vado pedelecs and, instead of being shuttled by van, we travelled everywhere by bike. The bikes performed flawlessly, including on a 40-mile ride between Düsseldorf and Köln. (I used “eco” mode most of the way and, after the end of the ride, still had three-quarters of a battery left.)

Turbo is Specialized’s name for its pedal-assist e-bike line, and the Vado is the US company’s flat-bar, mid-drive urban-focussed e-bike. In marketing literature, and in the video below, it’s pitched as a car replacement with the tagline: “busy lives call for faster bikes.”

The aluminium Vado, available in men’s and women’s versions, has integrated aspheric lens front and rack-mounted rear lights, a rear rack by Racktime (lots of modular attachments are available) and a detachable, lockable, 504Wh battery.

The attention to detail on this bike is impressive: take the Dry Tech mudguards. They are much longer than usual and have interior channels for catching and deflecting road-water – they were designed with the aid of Specialized’s Californian HQ wind-tunnel, with water thrown into the mix to simulate Euro-style weather.

And it’s not the only thing about the bike that’s Euro – Specialized’s e-bike R&D division is located not in Morgan Hill but in Switzerland. Dominek Geyer, Specialized’s Head of Brand for the Turbo line, talks about the Vado in the Spokesmen podcast which I recorded at the launch event.

The Vado’s 250-watt mid motor is a custom-tuned Brose unit, the output of which can be (somewhat) modified by the company’s Mission Control smartphone app. As well as a standard LCD handlebar display there’s a TFT screen with routing and maps.

There are four Vado models. The cheapest, at $2,700, is naked: no mudguards, rack or lights, and the top-of-the-range bike is a 28-mph speed-pedelec that, in Europe, will require taxing, registration (with a number plate) and riders will have to wear helmets, too.

Forgot your lights? Not with the Vado – they’re integrated