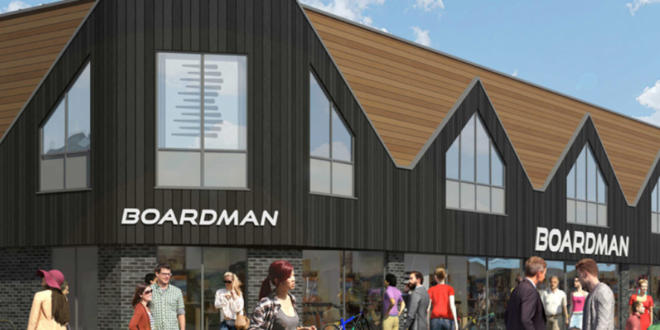 The new Boardman Bikes HQ and concept store in Worcestershire – due to open in April – has its own wind-tunnel, and Chris Boardman says this is the "most exciting thing I’ve ever done in my adult life because it’s been a dream of mine for more than seven years and, at last, it’s coming to fruition."

Boardman may now be Manchester’s cycling and walking commissioner, famous for wanting everybody to get on bikes no matter what their likely top-speed, but his background is very much going fast on a bicycle, and doing so by the application of science.

From his time working with Lotus and its aerodynamicists in the MIRA tunnel before his Olympic Gold at the Barcelona games in 1992, through to his time as British Cycling’s head of R&D, Boardman has racked up countless hours in wind tunnels and has developed a keen understanding of aerodynamics.

The new 18,000 sqft store is nearing completion on an outlet-mall-cum-country-park near Evesham.

‘When the doors open, it will be a genuine game changer for the sport of cycling," said Boardman.

"Making aerodynamic understanding accessible to anyone who wants to go faster – be they sportive rider or pro athlete – will be nothing short of revolutionary."

He added: "I knew that we had an idea that was going to be the most accurate tunnel in the world and we could do it and make it at a price accessible to the everyday cyclists but took that back to the team of Boardman and they were all over it – they could see the value of this.

"Having seen the impact that aerodynamics had for Olympic athletes I could see absolutely no reason why this wouldn’t have been hugely valuable to somebody riding time trials, triathlons or even sportives. On such rides you might be going slower but you’re out there an awful lot longer so aerodynamics affect everybody who wants to go more than 10 miles an hour on a bicycle."

The Boardman Bikes Performance Centre opens next month in The Valley in Evesham, a mall has been open since 1999 – it is home to retailers such as Fat Face and Mountain Warehouse.