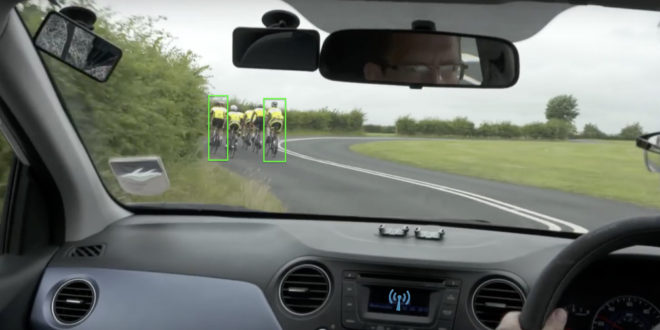 Beaconising the world could kill off cycling, warns academic

An American academic has suggested that bike companies and organisations should not discuss “beaconisation” of bikes and cyclists with the “connected car” industry until the ramifications of such technology on mobility are better understood. Peter Norton said a “Darwinian struggle between differing street users” means cyclists and pedestrians will likely be the losers in any rights-grab over who and what should be electronically tagged "for their own safety.”

Norton was responding to the news that an executive representing European and global bicycle industry organisations has been meeting with automative and telecommunication bodies to discuss technological standards for beacons, sensors, smartphone apps and other technologies that could keep cyclists safe by making them digitally trackable to the connected cars of today and the autonomous cars of the future.

“Technology is supposed to give us new choices, but instead it’s accelerating us along the same path as automobile domination,” said Norton, who is the author of the 2008 book Fighting Traffic which documented how “motordom” invented the term jaywalking in the early 20th Century in order to redefine what streets were for.

And they rapidly became for motor cars only, with pedestrians and cyclists marginalised, summarised Norton, who is the associate professor of history at the University of Virginia’s Center for Transportation Studies.

Today’s connectivity technology being mooted by car, telecoms and bike industry representatives is ostensibly for safety, but it’s also a re-run of “who gets priority on the streets,” Norton told me in an hour-long podcast interview.

The podcast was in response to this earlier BikeBiz article which documented a speech given by Manuel Marsilio at a connected car symposium on the first day of the Geneva Motor Show earlier this month. Marsilio is the general manager of Brussels-based CONEBI, the European trade organisation for the bike industry and he also represents the World Bicycle Industry Association.

“Bicycles will definitely have to communicate with the other vehicles as well as with infrastructure,” Marsilio told the audience.

“The bicycle industry deems that the proper deployment of harmonized connected services is key to this objective and agrees that interoperability is a must – it is unacceptable that road users nowadays could die on roads because vehicles cannot communicate with each other due to non interoperable communication technologies.”

This may seem like Marsilio is calling for mandatory use of such equipment – and the technology would only truly work if every cyclist, every pedestrian and every lamp-post had an electronic signature – but he has denied this.

The Bicycle Association of Great Britain has backed Marsilio to the hilt. The BAGB’s operations manager Steve Garidis told BikeBiz:

“The Bicycle Association, as a CONEBI member, fully supports CONEBI and its very effective general manager Manuel Marsilio, in its work to engage with new technologies and to take the cycle industry voice to the international bodies which are developing standards and regulations in these areas.”

Garidis stressed: "To be clear, neither Manuel, CONEBI nor the Bicycle Association have ever suggested, much less called for, mandatory beacons to be carried by cyclists. However, if there are safety or other benefits to be obtained from these emerging connectivity technologies which do not shift the burden of responsibility onto more vulnerable road users, it is important that the cycle industry engages at an early stage.”

Norton doesn’t believe any good will come out of such talks with dominant players. He said that Marsilio’s statements so far had been “jaw-dropping,” especially in the light of the privacy concerns raised by the current Facebook debacle.

“To the tech industry the people moving around are an opportunity to collect rich data,” said Norton, and he believes “chipping” cyclists and pedestrians won’t ever be as lucrative as keeping people in autonomous cars, where their data can be harvested more easily and lucratively.

Calling Mansilio’s view of the future “disturbing” Norton agreed that “the status quo is also disturbing” but he advised that the negative feedback Mansilio has been getting on social media due to this story could have been prevented.

“Manuel could have offered a vision that rules out the grimmer possibilities,” Norton said on the podcast. “[He appeared not to have any] sense of caution. Everything was full speed ahead, network everybody. To me that was calculated to induce the anger that has shown up on social media.”

Instead, Mansilio should have realised that his talk to an automotive audience might be picked up by a cycling one, with the latter often having a number of different worldviews to the former.

“If Manual had said ‘we have to consider networked bikes and I recognize there are serious implications here’ then a lot of that social-media hate could have been avoided,” said Norton.

“He should stage a conference and invite philosophers, high-end cyclists, everyday cyclists, academics, some policy people, and sit down and talk about what the networked future should be, so that the benefits can be realised and that what we fear can be avoided.”

Mansilio has been talking with the automotive sector since at least 2016. In that year he was invited to a high-level meeting organised by the transport committee of the United Nations Economic Commission for Europe (UNECA). This body created a working group focusing on the prevention of road accidents in 1950 and, in 1988, established what is now the Global Forum for Road Traffic Safety. This forum oversees the United Nations’ legal instruments aimed at harmonising international traffic rules. These legal instruments, such as the 1968 Convention on Road Traffic, the 1968 Convention on Road Signs and Signals, and the 1958 and 1998 agreements on technical vehicle regulations, help create a legal framework that addresses the main causes of crashes such as driver behaviour, road infrastructure and vehicle safety.

Garidis flagged the fact that Marsilio has been responsible for cycling’s inclusion in this influential rule-making body.

“It is largely through Manuel’s persistent and long term work that cycling now has a seat at the table,” said Garidis.

Marsilio is a staunch champion of cycling and protected cycleways. He told a UNECE meeting in 2016 that “policies like congestion pricing and fuel taxes could help governments and local authorities to invest more in cycling infrastructure.”

In video greetings sent to the Inland Transport Committee of the UNECE in May last year Marsilio said:

“I welcome the extremely valuable work the [Inland Transport Committee] has been doing to improve vehicle safety and the safety of vulnerable road users like cyclists. A correct legal and policy architecture at international level has a fundamental impact on the daily life of people."

He added: "I’m proud to say that the European bicycle industry … contributes to the decarbonisation of transportation while, thanks to a forward-looking approach, is becoming a major player in the frameworks of mobility and interconnectivity.

“Intelligent transport systems have the potential to revolutionise mobility and  UNECE offers a unique platform for shaping those frameworks and ensuring the safe introduction of future technologies.”

“Will beaconising the world further promote driving and kill off cycling?” is episode 184 of the Spokesmen show, a BikeBiz-connected podcast.