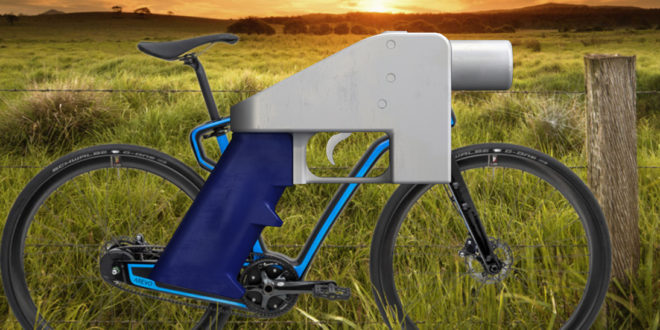 Internet shopping impacts on bike shops because of discounting, but so far nobody has created plans for a bike you can print at home. Not so for guns – a United States judge has this week blocked the publication of blueprints for 3D-printed firearms.

The US Attorney General announced on Monday that he was leading a lawsuit with several other states against the downloadable gun blueprints.

This is mainstreaming the subject of 3D-printed products. It’s not a new technology – the first 3D or "sterolithographic" printer was created in 1984. And now "additive manufacturing" is being used to create body organs, pasta, houses, trainer textiles, cars, and, yes, bikes.

The cycling industry has been using additive manufacturing for some time, with innovators such as Hope Technology first using 3D printing for creating prototypes before moving into full-on product creation.

Cerevo’s Orbitrec was displayed at the Consumer Electronics Show in Las Vegas in 2016. It had a a mix of 3D-printed titanium and carbon fibre frame tubes.

As with most other bike companies Trek and Giant are big users of 3D printing to create rapid prototypes. CSIRO of Australia is printing frames and parts with a 3D titanium printer. At 2016 Rio de Janeiro Olympics the French Olympic track team used 3D printed aluminium handlebars made by French prototyping company Erpo & Sprint. A life-size facsimile of Dutch pro rider Tom Dumoulin – who was second in this year’s Tour de France and who won the final time trial – was 3D printed for the Giant-Alpecin team by the Technical University of Delft in the Netherlands to help create a better fitting time trial suit.

A Silicon Valley start-up earlier this year used the 3D-printing of a bicycle to publicise its technologies. Arevo demonstrated its capabilities to quickly and economically produce complex shapes out of composite materials Arevo by making a carbon-fibre bicycle frame bicycle. As the frame is made with a robot there are low labour costs and the firm’s technology could enable the mass manufacture of 3D-printed composite frames.

The start-up has raised $12.5 million to commercialise its "digital additive manufacturing" process. Part of the start-up’s first round of funding came from In-Q-Tel, the venture capital arm of the USA’s Central Intelligence Agency, or CIA.

So, one arm of the US government is helping to make 3D printed bikes and another is aiming to shutdown the downloading of plans for 3D guns.

Previous A lack of progress?
Next Harley-Davidson hints it will get into the e-bike market with new LiveWire line