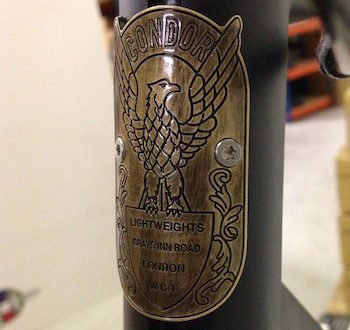 Condor’s production director Neil Manning of Condor has said the company’s London warehouse has been targetted by thieves. He is asking bike shops and members of the public to be watch out for the distinctive bikes among those stolen.

"We are not sure of the total loss yet, but it includes at least a dozen team bikes from this season that had just been overhauled for sale along with some of the teams 2017 wheels, a number of sale bikes, a number of Bromptons and an amount of Campagnolo Record components. Some other Campagnolo is missing, but we are yet to do a full stock check," said Manning.

Thieves broke into warehouse on Sunday. Police are studying CCTV footage recovered from the warehouse.

Manning continued: "We had a very busy Black Friday sale and our entire team of staff worked incredibly hard then and today despite the circumstances to ensure that our customers received the service we expect them to receive. This obviously put a big downer on it, but everyone remained positive and pulled together to get everything up and running again."

He added: "It’s hard to estimate the value of the loss at this time, but it was many tens of thousands of pounds worth. We have insurance, but these things still hit us hard. It’s taken many decades to get the business to the point it is now through sheer hard work and it is frustrating when some people think they can just help themselves."

I'm lost for words. Our warehouse has been broken into. Please spread the word. If you see any 2016 team bikes for sale please let us know