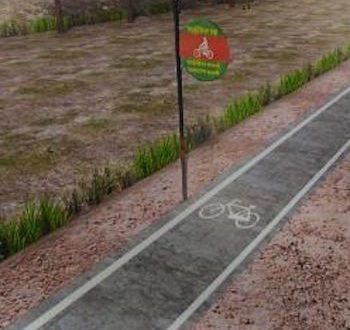 A 207-km-long cycleway in Uttar Pradesh between Etawah and Agra was declared open on Saturday, billed as Asia’s first “cycle superhighway”. A Dutch engineering firm helped to design the two-metre-wide cycleway which starts at a lion safari-park and ends at the eastern gate of the Taj Mahal in Agra. In parts the cycleway runs parallel to the main Etawah–Agra highway, and is separated from the road with a concrete divider. The cycleway also diverts from the highway to take cyclists via tourist attractions such as the Bateshwarnath Temple.

The idea for the cycleway was said to have come from Akhilesh Yadav, the chief minister of Uttar Pradesh. State minister Abhishek Mishra said: “It is a historical moment as a world-class cycling infrastructure is being made operational not only for locals but to the people of the state and the nation." He added: ”Chief minister Yadav wanted to transform the region as an ecologically conscious tourist destination, and the dedicated cycle tracks are a significant step towards promoting green and environment friendly commuting.”

Last year, the chief minister praised the cycle as a symbol of unity, health and environment. “It is the cheapest mode of transport for everyone – the poor, farmers, working class, youths and students,” Yadav said.

In order to stimulate the uptake of cycling Uttar Pradesh has exempted bicycles and cycle accessories from VAT.

The 207-km cycleway is ambitious, but separated city centre cycleways in Uttar Pradesh are often used for drying clothes or as parking lots for motorists. “Most cycle tracks in the state have been encroached upon for other purposes,” reports the Times of India, “while cyclists have no other option but to use the road earmarked for vehicular traffic.”