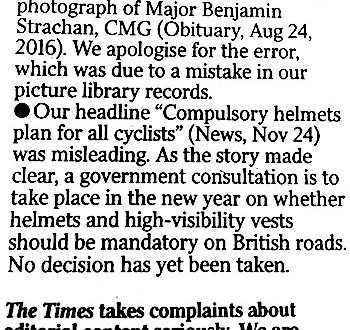 The Times has admitted a cover story about cycle-helmet compulsion on last Friday’s paper was wrong. In the easily-missed corrections and clarifications column the newspaper says that its story was "misleading". On the day, BikeBiz wrote that the story was, in fact, false. Transport minister Jesse Norman also disputed the story, citing a BikeBiz article that contained a transcript of his words and an audio recording.

Despite its retraction The Times still managed to mangle details of the story. The correction stated that "a government consultation is to take place in the new year on whether helmets and high-visibility vests should be mandatory on British roads." This is incorrect – as the Cycle Safety Review has not yet called for evidence none can have so far been provided.

It is correct that some organisations – such as the head-injury charity Headway – may make such submissions but it’s not possible for them to have already done so.

The cover story on The Times name-checked BikeBiz but selectively quoted the minister’s words to make it appear he was acknowleding helmet compulsion could be on the cards. The false story also led to a great deal of distracting coverage in other parts of the mainstream media.