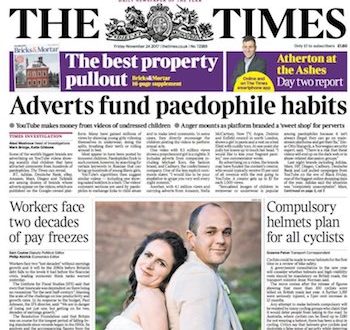 The Times leads with false story about helmet compulsion

The front cover of today’s Times newspaper leads with a misleading claim that the government is considering mandating cycle helmet use. The government is not itself considering this, as transport minister Jesse Norman made clear at a conference on Tuesday, which BikeBiz attended.

The Times leads with this headline: "Compulsory helmets plan for all cyclists on British roads". The story is probably based on a question asked at the DfT-sponsored conference by Mark Hookham, the transport correspondent for The Sunday Times. The minister made it clear that the review will only consider submissions made by others so if no individual or organisations raises the use of helmets, it won’t be considered by the review. Nor has the review process opened so there is nothing yet to consider.

Hookham asked the minister “Do you wear hi-vis and a cycle helmet when cycling and do you think they should be compulsory?”

Norman replied: “I have made it perfectly clear in previous conversations that I don’t take a position on hi-vis or helmets. That is something in relation to the Cycle Safety Review where we will see what the evidence and the submissions say.

“If you want to have a society where a 12-year-old can get on a bicycle it’s a serious issue as to whether you’re going to mandate hi-vis or helmets and there will be many arguments about whether the safety benefits outweigh or do not outweigh the deterrent effect that might have on people cycling. So we’re going to leave that to the review.”

And this morning the minister has referenced the earlier BikeBiz story to debunk the Times’ version:

To be clear: there is no “plan” re: compulsory helmets or hi-vis for cyclists as suggested in @thetimes. As @BikeBizOnline reported, I don’t take a position on this. It’s sure to be raised in the consultation, and we will consider it based on the evidence. https://t.co/FppxgRXHPA

Despite the minister stating that it was for others to raise the helmet and hi-vis compulsion issue, Graeme Paton of The Times claimed:

"A government consultation in the new year will consider whether helmets and high-visibility vests should be mandatory on British roads, the transport minister Jesse Norman said."

“The Minister’s clarification on this issue this morning has put this story in perspective. The Government is not seriously considering this issue: the Cycle Safety Review will be based on evidence, and evidence shows that helmets do not make a significant difference to people’s safety. We would strongly oppose any moves to make helmets compulsory for cyclists.”

Despite the easily provable inaccuracy of The Times’ front-cover – audio of what the minister actually said at the conference can be accessed on the Spokesmen podcast – the story is being run as fact by other news outlets, including this morning’s Today show on Radio 4. There has also been coverage on newspaper websites. The Daily Mail‘s headline stated: "Cyclists will HAVE to wear helmets AND high-viz vests by law in the New Year under proposed new rules". The Independent ran with "Government to consider forcing all cyclists to wear a helmet."

What, the same helmet?