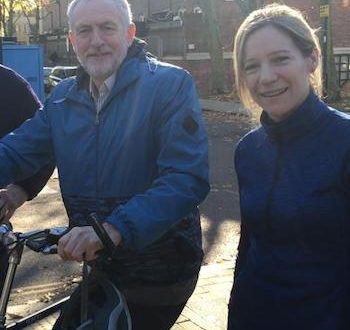 Labour leader Jeremy Corbyn has told bike bloggers in his constituency that he would like to see the provision of more "Quietways" for pedestrians and cyclists.

He said: “In the most deprived wards, such as Finsbury Park, up to 73 percent of households do not have access to a car. It’s a matter of social justice to provide safe, healthy routes for those on foot and bicycle. By creating high quality, low-trafficked routes, we can ensure that the health benefits of active travel are extended to all residents, not just those currently bold enough to ride amongst traffic.”

He made his comments on the CycleIslington blog, which said that "Jeremy recognised the importance of Quietways."

Cycle Islington’s Tabitha Tanqueray, a hospital doctor, told BikeBiz: "He understands the need for protected bike tracks on main roads, and has discussed some local routes with TfL."

Corbyn is a confident cyclist. Here he is riding his red Raleigh on a road and captured by the Google Street View car: