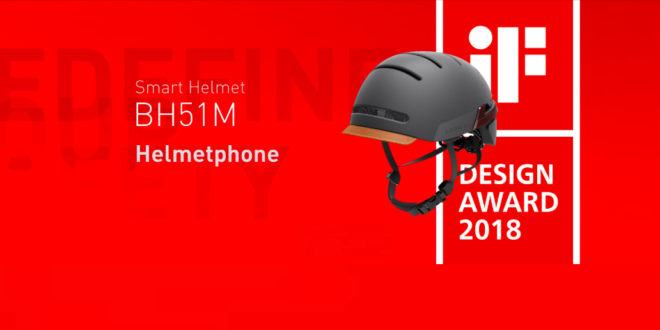 Smart helmet manufacturer LIVALL has received the iF Design Award 2018 for its urban cycling smart helmet the BH51M.

This is the brand’s fifth award for the helmet in less than 12 months. ISPO Munich announced last week that LIVALL’s BH51M had won its Product of the Year in the Urban category, while earlier this month the same helmet won Tech for a Better World Innovation Award at CES in Las Vegas.

In 2017, the helmet won the overall Accessories Award at Eurobike and the Sports Device IFA Innovation Award. While its RS1 for skiers won 2018 CES Innovation Award for Wearable Technology.

When connected to the iOS and Android apps, the Bluetooth bike helmets have an SOS function that alerts an emergency contact of the rider’s location when they fall off their bike and don’t react within 90 seconds.

CEO and founder of LIVALL Brian Zheng commented: “I fell off my bike a few years ago, which landed me in hospital. This inspired me to create the world’s first smart and safe helmet back in 2015.”

He continued: “As I hear more and more about skiers and bikers suffering horrific injuries it is time that we took safety into our own hands through the use of technology. With the new range of Helmetphone we have married the optimized functions for even better safety with ultimate style.”