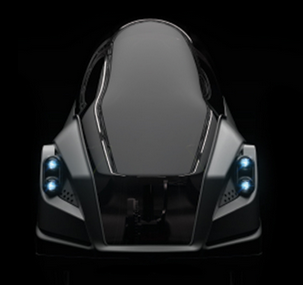 The IRIS e-trike will debut at Eurobike 2017

Tannus Tyres will unveil the highly publicised IRIS e-trike at the Eurobike show this August.

The new electric machine, which was created by Grant Sinclair, will be shown publicly for the first time at the German event. The airless, no-puncture, tyre company revealed last month it is currently fitting out the e-trike with Tannus Tyres.

The IRIS will be equipped with one 26 inch Tannus rear wheel and two 20 inch front wheels.

The e-trike has been compared to the Sinclair C5 launched by Sir Clive Sinclair, inventor of the World’s best selling computer, the ‘ZX Spectrum’ throughout the 1980s, and Grant Sinclair’s uncle. Tannus European director Jazz Walia said: “We are very proud to have the IRIS etrike on our stand. Until now only a handful of people have seen the vehicle so it will be a chance for all sorts of people to get a close up look at the IRIS.

“We anticipate that it will create a lot of interest at the show, but it’s not the only new and interesting tie up we will be showing.” The company is also using the show to launch its latest tyre – the 700x25c – that has been two years in development. Tannus believes it to be the company’s best performing product to date.

It will be among a number of bikes at the Tannus Eurobike stand – A1-419 – equipped with the South Korean company’s tyres. The stand will also feature the company’s first e-bike tyre, the 26×2.0, which is to be fitted to three Alton e-bike models and Chill Bikes’ no-maintenance ride fitted with belt drive and airless Tannus Tyres.

Grant Sinclair added: “I am looking forward to meeting people at Eurobike and showing IRIS to the public for the first time. The deal with Tannus as a tier one supplier to Sinclair is very exciting and their innovative solid tyres are the perfect solution for IRIS.”