Swindon, Manchester and now a very affluent London borough. The Bike Rooms is Pinarello’s much required own-brand shop window, complementing a quality, yet admittedly reduced crop of specialist dealers up and down the UK.

Tour de France wins and Hour Records do a lot for a bike brand’s desirability and demand in the City is higher than ever. Alan Sugar opened and occasionally shops at Regent Street’s Bike Rooms, so what about the customer demographic?

“I’d suggest it’s a 50/50 split between customers who come in knowing exactly what they want and those that know they want a Pinarello, but need our assistance in explaining which bike is right for them,” says impromptu shop spokesperson Joe Deacon. Shop spokesperson? That’s an odd job description for someone on the shop floor day-in day-out. “We don’t really have specific roles within the shop, we share the load and responsibility for all aspects equally. It means that when a customer comes through the door they’re not left waiting for the right person to become available, we’re all ready to help, whatever their needs. We’ve all been trained to handle the product, be that the mechanics, sales, marketing and bike fitting too.”

And for the customer entering, quality service is expected.

“We carry the full range of each of the five labels carried, even down to the town and MTBs that many people have never seen from Pinarello. Understandably that’s not something

every stockist can do. We’ll offer a free bike fit regardless of the bike and lifetime servicing. As our customer you’re buying into the shop and the lifestyle, so we’ll look after you.”

Such a depth of stock places The Bike Rooms firmly on the radar of the UK’s female cyclists, whether beginner or elite, which has perhaps resulted in a stronger than average footfall.

“We had found that some women felt intimidated by the bike shop experience. With two large changing rooms for both sexes and a more open plan and inviting layout, we’ve found everyone who comes through the door to be comfortable. I’d say it’s around a 70:30 ratio of male to female custom and erring toward faster growth for women’s cycle sales.”

A large flatscreen plays live racing There’s a handful of gents leaning on the counters taking it in as we chat. Kids are keeping themselves occupied with stretched-face selfies on in-store iPads, which double as digital sales aids. A couple more circulate the store observing and no doubt Instagramming the iconic Lotus engineered Boardman Olympic bike from 1992. Plenty more are peering in from the outside, analysing Wiggin’s Hour Record bike.

“Given our proximity to Buckingham Palace, we get a lot of tourists, but come lunch time the business really begins,” says Matt Toplis, another of the store’s spokes-salesmen. “The variety of paying customer is interesting, our first sale was a nice chap who bought an F8 with the best kit, though uses it for commuting. He actually came with us on our last Pinarello Experience in Mallorca. That’s another avenue we offer customers who are serious about the brand. There’s the chance to fly out to our partners on the island and hire an F8 for around €100 a day. If they decide they enjoy the ride they’ll be diverted to their nearest dealer.”

Community spirit is further enhanced with the shop’s Saturday club run rides, which kick off with a freshly made in-store coffee, but that’s not unusual nowadays. It’s the 2,000 square foot showroom, which lets in a copious natural light that lends itself to further engaging what is an open minded and social audience.

“You’ll notice art dotted about,” says Toplis. “The units in here all move freely, opening the space up for the occasions where we host events. We’re having a cycling art installation shortly, and before now we’ve hosted the Tour of Britain Party, among other press dos.”

So, is there a perk to opening a concept store on one of the UK’s most iconic streets?

“It’s a wealthy postcode. There’s a lot of big business here and we’ve some great press coverage with the likes of GQ and High Life lined up. Since opening the store, Alan Sugar has strolled here straight from a House of Commons meet. Pete Tong was another visitor. We’re pleased with the first two months and expect this won’t be the last Bike Rooms branch to open.” 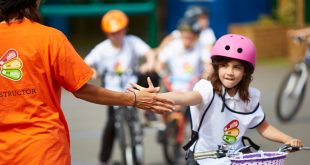