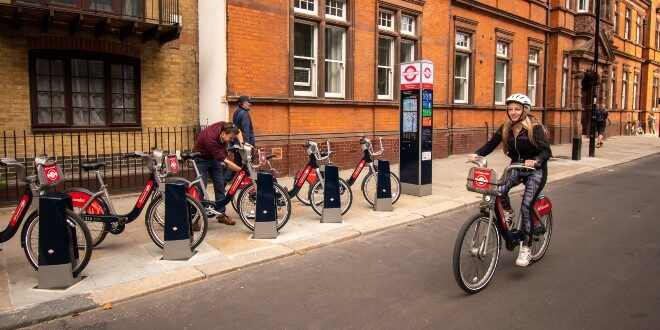 TfL’s flagship cycle hire scheme is continuing to go from strength to strength with its highest September hires in its 11-year history, as increasing numbers of Londoners returned to the office.

Office workers returning after the summer holidays helped contribute to the record September. Last month, TfL saw the highest volume of Santander Cycles commuter hires since March 2020, with an average 7,573 daily hires made between 07.00 and 10.00 on weekdays. There has been a noticeable increase in people using the Waterloo and King’s Cross hubs, and docking stations located near National Rail stations. 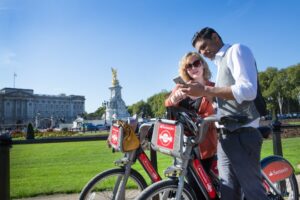 Santander Cycles can be hired from as little as £2 a day for an unlimited number of 30-minute journeys. The scheme recently reached its latest milestone of ten million hires via the Santander Cycles app.

The free app is available on Apple and Android App Stores, by searching for  Santander Cycles. Using the app lets customers skip past the terminal and get release codes sent directly to their phone.

To build on this success, the new ‘London Riders’ scheme was recently launched on the Santander Cycles app, which includes a new weekly prize draw. Each week, one lucky rider will win free annual membership and five free drinks at Caffè Nero. The London Riders scheme is available on both iOS and Android apps.

Will Norman, London’s walking and cycling commissioner, said: “Santander Cycles were a lockdown lifeline for many Londoners, so I’m delighted that the scheme is now playing a key part in London’s recovery from the pandemic. Our record September hires echoes the wider trend of more Londoners choosing to cycle. We are determined to do all we can to build on this further – including by introducing electric Santander Cycles to the network and expanding the scheme to new areas – to ensure a green and sustainable recovery for our city.”

David Eddington, TfL’s head of cycle hire, added: “We’re pleased to see Santander Cycles play a vital role in enabling people to return to work and it’s fantastic to reach yet another big milestone with 10 million hires made through the app. The cycle hire scheme continues to help millions of Londoners commute to work, explore the capital and exercise. We hope that our London Riders weekly prize draw will encourage more people to cycle and we’re looking forward to expanding our iconic cycle hire scheme with more app improvements and the introduction of electric bikes.”

Earlier this year it was announced that Santander will continue to sponsor London’s flagship cycle hire scheme until May 2025. This will support TfL as it moves forward with planned investment in cycle hire, ensuring the scheme continues to grow and encourage more Londoners to get cycling.

TfL and Santander are committed to expanding the cycle hire scheme to new areas of London and are working closely with Southwark Council to add eight new docking stations across the borough next year.

TfL and Santander are also working to introduce around 500 electric bikes into the scheme from next summer, helping to break down the barriers that stop some people from cycling, including fitness, age and journey length.