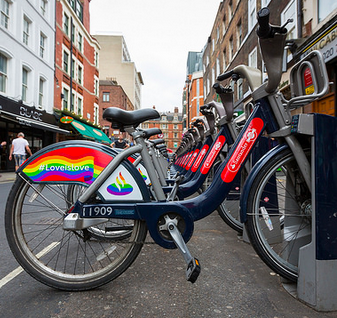 Transport for London is celebrating Pride by decorating parts of the transport network – including the popular Santander Cycles – with a new rainbow design that was created to raise awareness and show support for the LGBT+ community.

The new design highlighting #loveislove, along with rainbow adornments to the rear mudguards, will appear on fifty Santander Cycleles to celebrate how proud the capital is of its vast diversity.

On the day of the Pride parade, TfL will also mark the occasion with rainbow flags at several bus stops, including two in the Charing Cross area that will be kept permanently after the Pride celebrations to serve as a symbol of the organisation’s support for the LGBT+ community.

Mayor of London Sadiq Khan said: “Here in London, you’re free to love whoever you want to love and be whoever you want to be. That’s just one of the reasons why our city is seen as a beacon for the LGBT+ community and has such a vibrant, thriving scene; one that is bursting with colour and contributes hugely to the life and soul of London.

“As commuters make their way across the capital, they’ll be greeted by rainbow colours taking pride of place at underground stations, bus stops and Santander Cycles around Soho, sending a strong message of support to London’s lesbian, gay, bisexual and transgender community. This Pride, I look forward to celebrating the capital’s diversity and showing that London is open to all people.”

Santander chief innovation and customer officer Sigga Sigurdardottir added: “London is a city that has long championed diversity and inclusion. We are really excited to be a part of the celebrations and hope that local residents and visitors to the city enjoy exploring London on one of our rainbow Santander Cycles.”