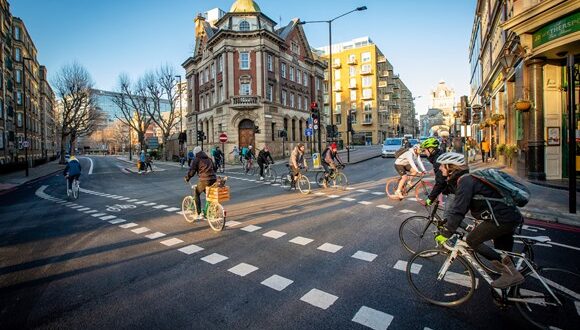 TfL has set out plans to make a series of trial changes to Tooley Street and Duke Street Hill in central London, which will extend the new Cycleway 4 route to enable safer essential journeys between London Bridge, Rotherhithe and beyond.

The changes are a part of TfL’s emergency response to the COVID-19 pandemic and TfL is asking people for their initial feedback on the plans ahead of construction work starting in early March.

This follows the recent start of construction work on a further trial extension to the route in southeast London, between Angerstein Roundabout and Charlton.

Construction work on Cycleway 4 started in July 2019 and the first section of the route, completed in September 2020, is already connecting neighbourhoods in southeast London to central London via a fully protected cycle route between Tower Bridge Road and Rotherhithe.

TfL is working to build trial schemes which enable more people to walk and cycle and help to maintain space on public transport for those who need it.

Trial changes planned for Tooley Street and Duke Street Hill as part of this emergency response include:

– Sections of light cycle segregation with wands in both directions, along Tooley Street and Duke Street Hill, as well as extended advanced stop lines for people cycling
– The eastbound arm of Tooley Street will be closed near the London Bridge Hospital and will become a new pedestrian space
– Some changes for general traffic including a new left-turn ban into Queen Elizabeth Street (except for local buses, taxis and cycles)

TfL is anticipating an increase in people arriving at London Bridge station wanting to continue their onward journeys by foot or cycle when lockdown measures are eased and public transport capacity is used by those who need it most.

Tooley Street is on a key strategic cycling corridor and is in the top 5% for current and future cycling demand in London. Creating this trial extension to the Cycleway 4 route will help to maximise the role played by London’s existing cycle network in supporting those who need to travel.

TfL recently started construction work on the second phase of an extension to Cycleway 4 between Greenwich and Charlton, which will trial using cylinders to protect people cycling from motor traffic between the Angerstein Roundabout and Charlton.

This second phase builds on the two-kilometre of trial cycle route that TfL previously completed in December 2020 between Greenwich and the Angerstein Roundabout. This first phase included a protected route through the roundabout, where a man was tragically killed cycling in 2018.

Several people have been seriously injured cycling along the busy route in recent years and the new infrastructure, which separates people on bikes from motor traffic, will give people confidence that they can cycle safely without having to mix with vehicles. Both phases are being delivered as part of TfL’s emergency response to the COVID-19 pandemic.

When this extension in Greenwich is complete, the new lanes will form part of an extended Cycleway 4, which will connect Charlton and Greenwich. Work from Greenwich towards central London also restarted in December 2020 along Creek Road.

This includes the redesign of several junctions along Creek Road, a segregated two-way cycle track and the installation of new pedestrian crossings. 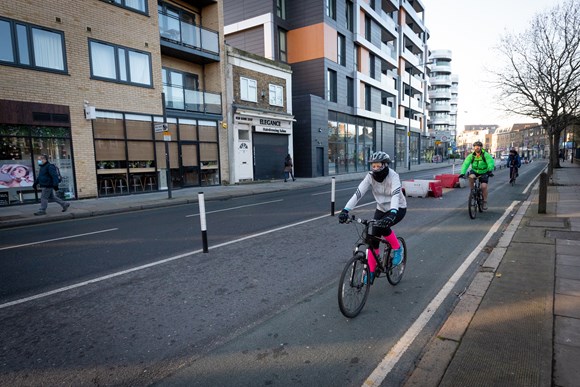 TfL will continue to work closely with local councils on plans to build the remaining sections of Cycleway 4 between Rotherhithe and Greenwich, which will further boost connections between Greenwich and central London via high-quality cycle routes.

Will Norman, London’s walking and cycling commissioner, said: “Recent TfL data shows that many Londoners have turned to cycling during the pandemic as a way to exercise and make essential journeys, so it is vital that they are able to do so safely.

“The trial changes being made to extend Cycleway 4 will enable more people to cycle safely and easily around London Bridge and beyond, building upon measures already taken to extend the route between Greenwich and Charlton. I urge people to submit their feedback now and take part in the engagement, so we can ensure these changes work for all those living, working and travelling in the area.”

Helen Cansick, TfL’s head of Healthy Streets Delivery, added: “As the pandemic continues, the need for safe walking and cycling infrastructure is more important than ever, to ensure that there is enough space on public transport for those who need to travel. These trial extensions to Cycleway 4 will create a much safer environment for those cycling between central London, southeast London and beyond and we really value people’s feedback on our plans to ensure that they work for everyone.”

Recent cycle count data from TfL shows increased levels of cycling in both inner and outer London last autumn, as people across the capital continued to use active travel as a vital way of getting around during the pandemic. These counts showed a 7% increase in cycling in inner London and a 22% increase in outer London, compared to the previous count in spring 2019.