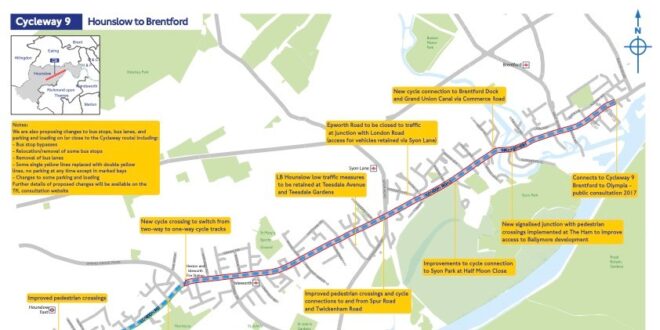 TfL is asking people to have their say on newly unveiled plans for an extension to west London’s Cycleway 9 route.

The planned changes between Brentford and Hounslow would make thousands of walking and cycling journeys each week safer and easier, said TfL, enabling more people to use healthier and more sustainable forms of travel. 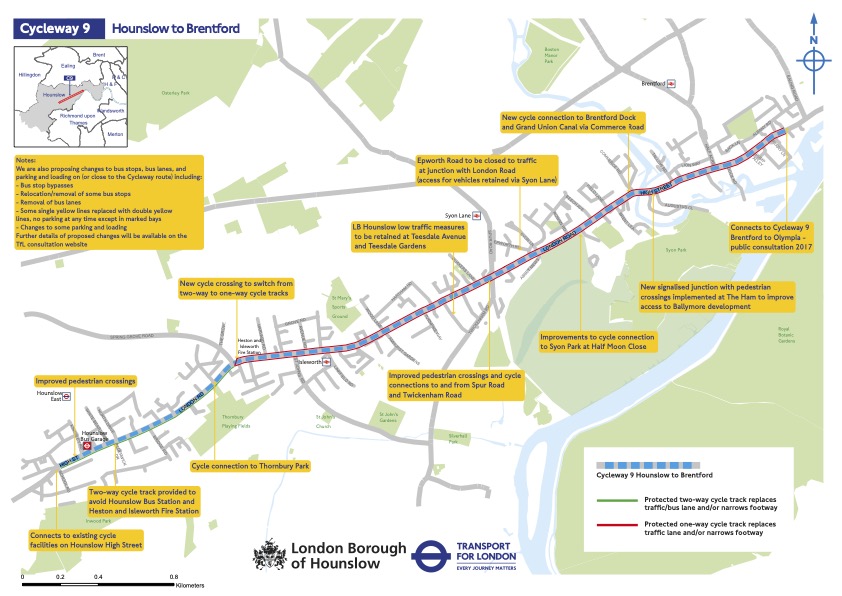 The changes would form part of a series of infrastructure upgrades by TfL, Hammersmith and Fulham Council and Hounslow Council along the Cycleway 9 corridor, which are enabling thousands of residents, visitors and families to cycle safely. Work on Chiswick High Road has created a protected route for cycling using light segregation wands, while Hammersmith and Fulham Council is constructing a Safer Cycling Pathway between Goldhawk Road and Hammersmith Gyratory.

A protected space for cycling has been constructed on the South Circular Road by Kew Bridge and TfL started work in November 2021 to transform the Hammersmith Gyratory for cycling.

The consultation is now open at tfl.gov.uk/Hounslow-Brentford and people will be able to have their say on the plans until 16th February. While construction on the extension would be dependent on TfL securing a sufficient long-term future funding agreement with Government, consulting now will allow TfL to assess public responses and ensure the design is deliverable while these discussions continue.

Will Norman, London’s walking and cycling commissioner said: “We’ve seen a massive increase in people walking and cycling in the past few years and we are working closely with boroughs like Hounslow and Hammersmith and Fulham to help transform roads and make sure there is enough space for people to walk and cycle around the capital safely.

“If TfL secures a long-term financial deal with the Government which allows this cycleway extension to go ahead, pedestrians and cyclists could see huge benefits from the new connections to the Brentford Dock and Grand Union Canal. Local residents could also be able to enjoy the other improvements, including new crossings and the planting of new trees, which would improve the look and feel of the area. I urge everyone to have their say in this new consultation and share their views with us.”

Helen Cansick, TfL’s head of Healthy Streets Investment, said: “Walking and cycling have been vital ways of getting around during the pandemic and our work with Hounslow and Hammersmith & Fulham Councils along the Cycleway 9 route has enabled thousands of local people and families to get around safely by bike.

“This planned extension to the route between Brentford and Hounslow would open up even more west London neighbourhoods for safer walking and cycling journeys, connecting local people to the wider high-quality cycling network in the capital. While we continue to discuss with Government our need for sufficient long-term funding, we are keen to get feedback on our plans and I’d encourage people to have their say on this hugely beneficial extension.”

Councillor Hanif Khan, Hounslow Council cabinet member for transport, said: “This consultation is a great opportunity for anyone who lives, works or visits our borough to give their views on TfL’s proposal to extend Cycleway 9, from Brentford to Hounslow. I would like to encourage as many people as possible to get involved in the conversation.

“The ability for more people to have safer cycling journeys, and to connect more areas of London to a cycling network, is a vital part of our work to support healthier lifestyles, free up space on public transport, and encourage more people away from private car journeys.”

Since May 2020, more than 100km of new or upgraded cycle lanes have been built or are under construction.