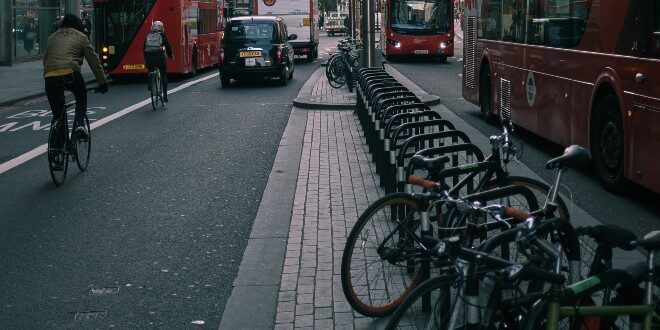 TfL funding to create up to 2,000 new cycle parking spaces across capital

TfL has awarded funding of more than £1million to create up to 2,000 new cycle parking spaces across the capital, providing a further boost to the Mayor’s Streetspace programme of measures to boost walking and cycling.

Recent data published by TfL showed walking and cycling accounted for half of all journeys between April and June, up from 29% before the pandemic.

TfL said it is committed to ensuring that as many of these cycling journeys as possible begin and end with a safe place to park, especially as a lack of parking is one of the main factors that deters Londoners from cycling. Almost £1million has been awarded to 14 boroughs across inner and outer London, with the spaces being delivered over the coming months.

Around 900 of the new spaces are to be delivered along routes that have been created or upgraded as part of Streetspace. A further 1,100 spaces across London will be created using a mix of different parking types, including on-street cycle parking, residential cycle hangars and new cycle hubs at tube and rail stations.

In Enfield, the investment will create new parking spaces at GP surgeries, helping people to get to vital appointments more easily by bike, while in Merton, Sutton and Kingston, it is planned to create 514 new spaces across 37 schools.

TfL has also approved funding for the first time for two cargo bike cycle hangars in Waltham Forest, which will be in Walthamstow and Wood Street town centres. The hangars, built for local businesses, will be able to store two cargo bikes each.

More than 1,400 new cycle parking spaces have been delivered on the TfL road network since May through the Streetspace programme, in addition to more than 90 kilometres of new or upgraded cycle lanes that have been built or are under construction.

“Safe and secure parking is key to enabling many more Londoners to cycle so I’m delighted that up to 2,000 more spaces are set to be created across our city in the coming months,” said Will Norman, London’s walking and cycling commissioner. “These will build on the 1,400 new cycle parking spaces which have already been put in place through our Streetspace programme and are making a big difference to local communities.

“We know that a lot of people have started cycling as a way to get a bit of exercise over the past nine months, and secure bike parking means these trips can also double up for shopping for necessities or other essential journeys.”

Penny Rees, TfL’s head of healthy streets investment and delivery, added: “We’re committed to making cycling a safer and easier choice for more journeys in the capital and it’s vital that as many of these journeys as possible begin and end with a safe place to park.

“We know just how important cycling has been in enabling people to get around safely during the coronavirus pandemic and this new investment with London’s boroughs will benefit thousands of people cycling, building on our bold Streetspace work so far.”

TfL is working closely with London’s boroughs on plans for the next phase of its Streetspace programme, with more temporary cycle routes set to be delivered over the upcoming months. TfL recently announced the opening of new cycle lanes in Greenwich and Chiswick, adding 5.5 kilometres of space to London’s growing cycling network.