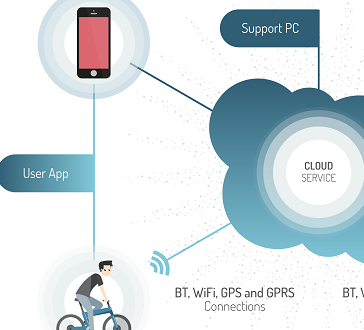 Tap into the potential of the “connected cyclist”, urges ECF

Cycling is beautifully simple – you pedal (with either hands or feet) and you’re propelled forward on one, two, three or perhaps even four wheels. But it can be made more complex, not just with real bells and whistles, but digital ones. The explosion of Strava and navigation apps shows that adding a smartphone to a cycle ride is both enormously popular and most definitely useful.

You can, of course, eschew the digital bells and whistles by riding untethered from the cloud, but an increasing number of people like to pair their pedalling with connectivity.

And, according to some experts, this so-called "smart cycling" is the next big thing. "The connected cyclist," reckons Niccolò Panozzo of the European Cyclists’ Federation, "is the bike industry’s next big market."

Panozzo is the ECF’s "smarter cycling" bod and he’s one of the curators of Smarter Cycling Conference which is to be staged at Eurobike in Friedrichshafen, Germany. This year’s conference will be the concept’s second outing. It’s aimed at "companies eager to shape the future of cycling," said Panozzo, companies seeking to "explore the potential of full rider-bike-cloud connectivity."

The Connected Cyclist Conference will be the "perfect opportunity for bicycle brands, component manufacturers, and related retailers, to see how they all can hook into this new digitalised cycling future," said Panozzo.

One of those speaking at the conference – which is staged in association with the ADFC, or German Cyclists’ Federation – is Oliver Kozak, Senior Advisor at the Executive Agency for Small & Medium-sized Enterprises at the European Commission. He will present on the €3 billion of public support and investment that’s on offer for disruptive businesses, old hands as well as start-ups.

The conference will be staged on 29th August and costs €50 to those not in the ECF’s Cycling Industry Club.