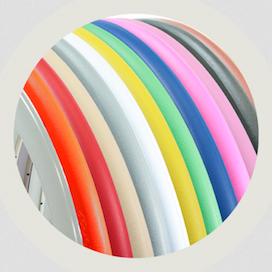 Tannus is to launch two new tyres at Eurobike next month – including one designed specifically for e-bikes and bike share schemes worldwide.

The South Korean company is in talks with a handful of bike share companies around the world following the company’s debut at the Taipei International Cycle Show.

It will launch the bike share and e-bike specific 26×2.0 tyre at Eurobike alongside the 700x25c road tyre. The 26×2.0 is being built specifically for use on the South Korean Alton Sports Chevrolet e-bike, but is also being aimed at the burgeoning bike share market.

Tannus’ European director Jazz Walia said: “We are in talks with a number of bike share companies. There was a lot of interest in Taipei earlier this year, particularly from a number of Chinese parties. It’s very exciting times.”

The Chevrolet will be among a number of bikes using Tannus on show at Eurobike next month and will also be the launch pad for the 700x25c tyre.

Walia added: “The tyre has been developed for more than two years and is the culmination of painstaking research. It’s been tested in the UK for a few months but the perfectionists in head office did not want anything to be rushed until we were totally happy with the composition. The result is what we believe to be our best airless tyre to date, in terms of comfort and speed.”