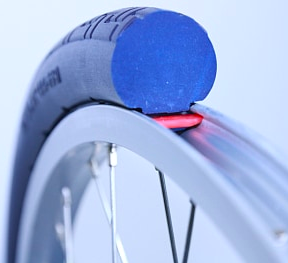 The Aither 1.1 tyres will be fitted to a range of five bikes produced by Alton Sports, South Korea’s second biggest bike producer with around 20 per cent of the market share. The company owns a number of licensed brands and Tannus Tyres will come as standard on its Benetton hybrid and children’s bike, on a Chevrolet Electric bike, a folding bike and on the Raleigh Mini Bell.

Initially the company will supply tyre for 10,000 bikes in 2017; discussions to increase this in 2018 are already underway.

The company has also agreed to supply its tyres to a US start-up called Ezra Bikes, which is running a Kickstarter campaign for its range of children’s bikes. The company is using Tannus Tyres as a major element of its pitch to raise $27,500.

A representative from Ezra’s Bikes said: “We have been long time advocates for flat proof tires and have researched many different companies and designs. Through our research, we’ve partnered with a company called Tannus Tires to bring a flat proof tire to all models of Ezra Bikes.

The deals with the Korean and US bike manufacturers come on top of Tannus’s deal with Specialized last year to supply an unbranded tyre for the Californian company’s Alibi hybrid and sales of more than 160,000 Chacle ‘shopper’ bikes fitted with Tannus in Japan.

Tannus European director Jazz Walia said: “We are very pleased to be supplying tyres to these fantastic bike businesses. Alton is one of South Korea’s leading manufacturers in what is a very competitive market, so it is no small §achievement for the company. Ezra are an exciting and motivated new company which has great potential and we hope both deals will be the basis for a long-term relationship.”