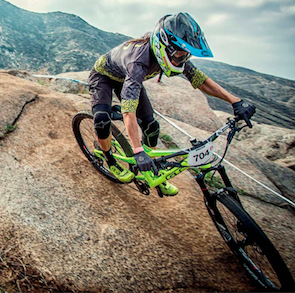 Talking all things MTB with GT

The dual suspension GT RTS was the pinnacle of early-90s mountain bike technology. Ridden by the likes of Julie Furtado, Walter Braendi and Nicolas Vouilles, the bike, which hit the market in 1993, was responsible for numerous medals, and was in fact widely considered to be one of the first widely-produced downhill bikes in the world. It its time, the RTS was undoubtedly at the cutting-edge of advancements made in the sport. Whilst aesthetically, the bare bones of the RTS are still visible in modern bikes, 24 years later, a lot has changed.

“Everything has progressed in 20 years,” says GT Bicycles global head of products Tara Seplavy, “from industrial design to engineering, kinematics, materials, dampers, manufacturing and the purchase of the bike itself. Even the trails we ride now, compared to ten or 20 years ago, have changed. So much of it has been dumped on its head. The full suss bike that you get now for £1,500 will outperform even the most decked-out of those classics. What you still have, though, is passion to ride new trails, push the limits of yourself and your equipment, and just plain have fun!”

Ours is an industry that doesn’t slow down or settle for less; in fact, 67 per cent of BikeBiz readers that we polled agreed that in 2017, sufficient investment is being made into advancing mountain bike technology. Along with the progression of key materials like carbon, the most significant jump in ride quality has been on bikes specifically designed for both younger riders and women.

According to Seplavy, this is simply down to inclusivity and accessibility: “For me, there are three big successes that stick out. Firstly, there’s the boom of kids getting involved the sport – be it at bike parks or through programs like NICA racing in the States. What you’re seeing now from the growth of youth participation is really encouraging. Secondly, there’s the continuous growth of women’s cycling – mountain biking is not just for the guys, and the cycling industry is finally starting to figure this out! When I go out on the trails to visit dealers and to events, I am seeing a lot more women than a decade ago, so this is a great sign. Thirdly, there are now more accessible price points – the cycling industry has not been immune to inflation or global currency fluctuations, but over the last couple of years we have begun to see a new crop of truly trailworthy bikes coming in at rather sharp prices. Sure, they might not be carbon fibre and decked out with the latest cutting-edge technology, but they have spot-on geometry and the basics to have fun on more than just fire roads and carriage paths.”

Mountain biking is not just for the guys. The industry is just starting to figure this out

So a greater and more diverse group of enthusiasts are getting more bang for their buck. That’s encouraging news for retailers and enthusiasts, but what exactly are they getting for their buck? What products are pushing the industry forward at the moment? “I’m in product development and I often get sneak peeks of what is happening from suppliers 18 to 24 months before goods hit the sales floor. I have been excited by the developments we’re seeing in lower cost, dependable tubeless setups from a couple different brands. I am also always keen to see what Nick Larsen and the crew at fabric have up their sleeves. They always have something innovative brewing.”

Historically, if we look back over previous incarnations of so-called high-tech mountain bikes, very little of the so-called innovations have stuck. From overly complicated front and rear suspension systems to redundant materials and infinite variations on wheel and tyre sizes, how can we be assured that current innovations will stand the test of time? “It’s always hard to judge this one. Sometimes it’s things we see brewing years out, whilst other times it seems to be a quick ramp-up and then it burns out. Generally, if you see something being used successfully as an edge by top riders in World Cups or EWS races, expect that there is something there to keep an eye on that’s more than just a fad.”