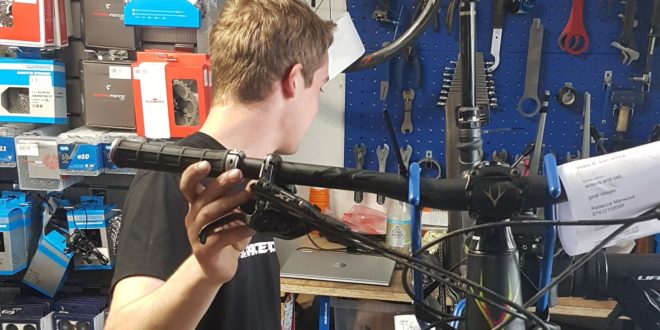 Tales from the workshop: Saturday boy to career path

Samuel Jaggard started as a part timer in a bike shop, and has just completed his international apprenticeship programme with cycle industry training specialist The Bike Inn in Cumbria

Samuel Jaggard progressed through secondary school where engineering peaked his interest. Enjoying the mechanical side of things and needing some pennies, Samuel managed to gain a Saturday job in the local bike shop in Yarm, located in the north east of England.

With school coming to a close and the increase in cycling, Samuel opted for an apprenticeship with The Cycle Rack. Now all that was left was to find a qualification course to start his apprenticeship.

Having made numerous phone calls and put in hours of internet research, Samuel opted for The Bike Inn course due to it providing a OFQUAL L3 qualification. In addition, it has one of the best equipped workshops in Europe and tutors that have an extensive knowledge base and some interesting cycling history.

“I was surprised at the depth of content: not only does the course cover all mechanical areas but also looks at distribution, support, and connections within the industry. For me this was very important, as it might be a side of the cycling industry I want to go into.”

The Bike Inn is based in Appleby, Cumbria and is set out with eight workstations and all the professional tools needed to complete hands-on training. Alongside the teaching area is a live workshop, in which specialist tools are kept, and tool/component alterations are made. It’s here that specialist work is carried out, such as e-bike battery rebuilds.

“Having completed The Bike Inn’s professional course including my OFQUAL L3 qualification, I have undoubtedly increased my confidence and my mechanic skills,” Samuel said. He also told the tale of a year ago being ‘stumped’ by Di2 bikes, but now is fault-finding and solving complex problems solo.

The Cycle Rack (Samuel’s cycle shop) has increased its workshop capacity in recent months with gravel, road, hybrids and e-bikes being a popular selection of bikes for repair. Samuel now has the knowledge and skill to tackle any type of bike with continued support from The Bike Inn only a phone or video call away. With a full workshop, Samuel is relishing the process of reordering and looking at distribution.

Tags retail Tales from the workshop