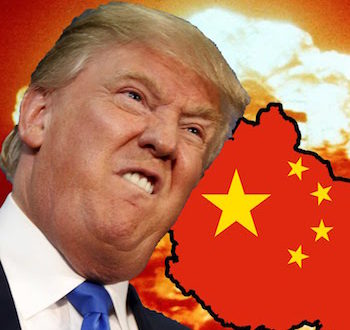 Taiwan readying for turmoil as Trump dumps on China’s interests

At the risk of writing a local-man-hurt-in-earthquake-that-killed-500 story about the ramifications of Donald Trump going ballistic in Asia – perhaps literally – it cannot be avoided that the global bicycle industry is heavily reliant on both China and Taiwan, and sabre-rattling isn’t good for business. Most of the world’s mid- to high-end bikes and bike parts are made in factories in China and Taiwan. Despite the fact that Chinese bicycle factories are owned by Taiwanese entrepreneurs, and vice versa, officially there are supposed to be only cursory relations between the People’s Republic of China and the Republic of China (Taiwan to you and me).

The US president-elect accepting a phone call from Taiwan’s President Tsai Ing-wen was seen as highly inflammatory by Beijing. China has since stepped up air patrols around Taiwan and has flown nuclear-capable bombers over the disputed waters of the South China Sea.

In an editorial earlier today the Taipei Times said “a war of nerves in the Asia-Pacific region is under way.”

China has viewed Taiwan as a renegade province since 1949 when Chinese nationalists fled there and established a government after losing a civil war.

Anti-Taiwan and anti-Trump rhetoric from Chinese officials and state-sanctioned Chinese newspapers is being deliberately ramped up in order to warn Trump that he’s playing with fire.

"If [Trump] tries to … harm China’s core interests, ultimately he will lift a rock only to crush his own toes," Chinese foreign minister Wang Yi said yesterday in Switzerland according to comments posted on the ministry’s web site.

"Trump’s bloated and bloating ego may prevent him from seeing that is the likely outcome that lies ahead if he persists with this gamble,” thundered the China Daily. "Beijing should be prepared for the worst-case scenarios, particularly regarding Taiwan, as a presumptuous and ill-guided Trump looks set to usher in an era of turmoil," the state-run newspaper continued.

China’s Global Times, a state-run tabloid, remarked that “the calculating businessman might feel shrewd about seizing China’s fate by the throat through the Taiwan question. However, the truth is this inexperienced president-elect probably has no knowledge of what he’s talking about. He has overestimated the US’ capability of dominating the world and fails to understand the limitation of US powers in the current era.”

The tabloid urged China’s leaders to act tough over Trunp’s “outrageous remarks” stressing that when it comes to Taiwan “China is now confident enough to arm-wrestle with the US.”

“We have a whole raft of tools to fight against Trump’s economic and trade threats,” warned the Global Times. “It will be a decisive battle for Beijing to safeguard its core interests. If Trump wants to play tough, China will not fail.”

Perhaps voicing official views the newspaper suggested that Beijing should start “punishing Taiwan independence forces … through non-peaceful means and make the use of military force an actual option to realize reunification.”

The editorial added: “What reason do we have to accept a most unfair and humiliating deal from Trump?”

Niu Xinchun from the China Institute of Contemporary International Relations warned that “[Trump’s] remarks have not only jeopardised world peace, but also upset the Beijing-Washington relationship … he will pay for his mistakes.”

It’s possible that Beijing could increase economic, political and diplomatic pressures on Taiwan.

Trump’s threats to impose sanctions on US companies who source from China would severely impact on the bicycle industry.

"Although manufacturing costs in China have risen in recent years, they are still far below the level in the US. Besides, many overseas manufacturers set up plants in China not only for the sake of lower costs, but also for the country’s gigantic market.”

Trump’s rhetoric may be alarming Beijing, but it has not yet rattled the ratings agencies. Fitch Ratings is playing cool, saying that "Taiwan’s complex relationship with mainland China is already factored into our sovereign rating for Taiwan, which would only be impacted if tensions escalated to a degree that significantly increased the probability of a macroeconomic or financial shock."

Fitch said risks "have risen" but are not yet at a pitch sufficient to sound warnings adding that there are "numerous economic agreements between China and Taiwan, including the 2010 Economic Cooperation Framework Agreement, have not been significantly affected."

The ratings agency predicts that "trade between China and Taiwan will continue to be largely unaffected by cool cross-strait relations."