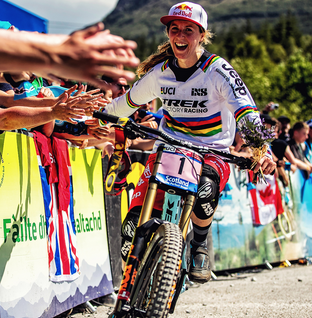 After an eventful year of successful events, Rachel Atherton has been named the 2016 BT Sport Action Woman of the Year.

The award, which is now in its fourth year, recognises the most outstanding sporting achievements of the last 12 months by female athletes.

Three further cyclists were nominated in the shortlist for the award including Sarah Storey, Kadeena Cox and Laura Kenny, who was named Sunday Times’ Sportswoman of the Year at an event last week.

Atherton has enjoyed what the athlete has called her “perfect year,” having made history by winning every single UCI Bike Downhill World Cup – the first rider in history to do so ­– before going on to secure the world title in September.

Including the seven victories she claimed this year, Atherton has now won a total of 13 consecutive world cup races, beating her previous record of nine.

The world title was one of a total of five awards won by the four cyclists shortlisted for the award. In total, Britain’s female riders won five Olympic and 11 Paralympic medals in Rio.