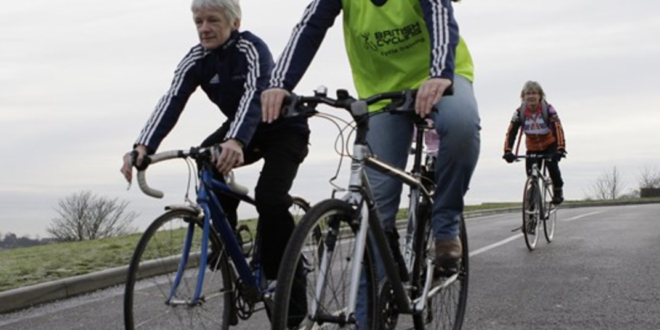 Sport England today published the results to its Active People Survey, which shows that the number of women regularly active is at a record level, while cycling has seen a modest decline.

7.21 million women are now regularly physically active, narrowing the gender gap from 2 million to 1.55 million – this news comes two years after the launch of the This Girl Can campaign. The figures also show more people from black, Asian and ethnic minority backgrounds (2.92 million) are playing sport, indicating that members of these communities are more likely to be active (37.5 per cent) than white British citizens (35.9 per cent).

Although gymnastics, boxing, and football have seen an increase, cycling showed a four per cent loss in participation, decreasing by 85,200 in the last year. It remains popular with people in their middle age, but is attracting fewer young people under 25. However, young people are slightly more active than before, with an increase of 3,700 compared to 12 months ago – 151,200 higher than in 2006.

1.60 million disabled people now play sport once a week, 20,900 fewer than 12 months ago, although the number of disabled people playing sport has remained generally flat over the last two years. The proportion of people from lower socioeconomic groups who play sport – which is at 26 per cent – remains much lower than those from more affluent groups – 39.5 per cent – continuing the trend of the last three years.

“As the national cycling charity, we play a large role in actively encouraging and enabling more women, young and old, to cycle," David Murray, Cycling UK’s head of communications and campaigns, told BikeBiz. "Our recent work in Birmingham is a good example. This year we have set up eight Community Cycle Clubs in Birmingham – with 81 per cent of the participants female, 28 per cent of them non-regular cyclists and 28 per cent previously physically inactive. In total, 62 per cent of those involved are from deprived areas and 80 per cent are non-white.

"More women than men think it is too dangerous to cycle, but that danger is more perceived than real. Cycling UK works to tackle that perception by improving cycling conditions so that people of all ages, genders, backgrounds and abilities can cycle safely and confidently. We help provide training so that women and others can gain skill and confidence cycling, while also campaigning for better cycling infrastructure. Providing the right space for cycling has proved the biggest antidote to perceived risk, particularly for female cyclists, the young and the old.

“We hope this work across the UK will see a rise in the number of women aged under 25 taking up and continuing cycling and arrest the decline shown in the Sport England statistics.”

Jennie Price, Sport England chief executive, said: "Our This Girl Can campaign set out to tackle the gender gap, so to reduce it significantly in just two years shows we are making a difference."

“Sport England’s new strategy, Towards an Active Nation, makes investment in sport and activity for under-represented groups a priority, and today’s figures reinforce just how important this is. It’s not acceptable that if you earn less or have a disability you are so much less likely to play sport or be active. We need better insight, more targeted funding and a wider range of partners to help us make a difference to these groups. We have shown an insight-led approach can work with women, and we now need to apply that thinking to other under-represented groups.”

The figures show growth in the overall number of people who play sport, which now stands at 15.97 million people over the age of 16 playing sport weekly. This is 229,400 more than 12 months ago.

Share
Previous UPS goes back to its pedal-powered roots with cargotrike
Next Maxxis: gaining traction in the UK – an interview