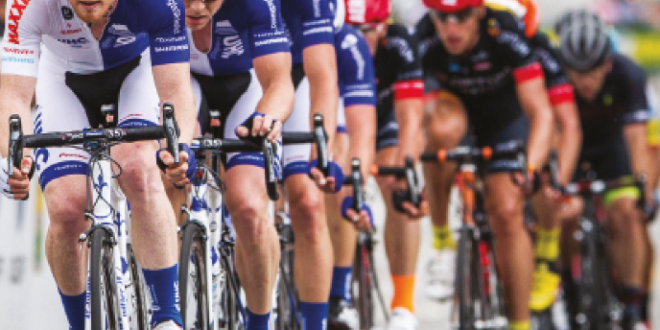 Maxxis: gaining traction in the UK – an interview

I explore the past and future of Maxxis Tyres, and its manufacturing, customer relations and marketing strategies in an interview with managing director Derek McMartin, marketing manager Amy Cahill, and cycle brand manager Stephen Robinson.

Derek, what kind of education and experience led you to be in your position? What are some of the responsibilities that your job entails?

DM: I’m a qualified toolmaker. I left to get a degree in engineering, and then went and worked at Rolls Royce Aerospace making engines. The engineering background is unbelievable. I have to understand the technical questions in my position, and that background allows me to challenge engineers on what they’re doing. It’s good. They listen to whatever I say, so they know they can’t just fob me off. So eventually I just worked my way up at this point.

Maxxis has a global board of marketing, and I’m the European representative of the global board. So anything that happens in Europe on the marketing side, I’m there.

Stephen, how does your role at Maxxis compare to similar roles across the trade? How much do you have to do with other aspects of Maxxis?

SR: I can only directly compare this role to my previous one – the two are very similar, but I only have to focus on one brand now. At Raleigh, I looked after 15 or 16 brands. So I was very fortunate to walk into a role at Maxxis – it’s broadened my horizons. I have many fingers in many pies. I wouldn’t say ultimate control, but major control. We just look at how to make the most impact. It helps to have a very good boss who understands that the cycle industry is very different from others covered by the company.

As I understand it, Maxxis’ 50-year anniversary is this year! How will you be marking the occasion?

DM: Maxxis is actually about 20 years old, but it’s owned by the family brand, Cheng Shin, which is much older. After years after selling Cheng Shin, it was a matter of finding a brand name we could use in Europe. It was a global decision – an election. There were 100 names, everybody pooled in, and then Maxxis won. It was a strong name – the double “x” represents power.

We can’t say exactly what we’ll be doing to mark the anniversary, but there’s lots planned. We’re looking at a lot of smaller, global activities that would involve our distribution network.

What have you spent the last year doing to grow the brand?

AC: This year has been about getting the brand established, and educating the IBD about the fact that the brand is available as a broad spectrum. Our goal in the next three or four years is getting a good foothold in the road sector. We offer a great product range in that sector. If I’m being perfectly honest, we can do absolutely no advertising and still sell MTB tyres, but if we promote and educate the end-consumer, we give back to the IBD. So the IBD gets the whole marketing experience, and we get digital assets from it.

Over in Asia, Cheng Shin is dominant across cars, vans, everything. But in Europe, Maxxis is still a developing brand, other than in mountain bike tyres. It’s just leveraging that market penetration – we obviously do road tyres, BMX tyres, but a big focus for the UK operation is making sure that it’s not mountain bike tyres that we do. We went to ‘Ard Rock Festival, so for the first time we had a stand with all the tyres. That stand was just rammed for three or four days. There were enthusiasts looking at the road tyres who didn’t even realise that we did them, which is one of the challenges that Stephen’s been tasked with. What we don’t want, though, is to forget about the mountain bike sector. Competition moves quickly. We try to tackle both road and off-road. But our market strategy is to penetrate the road side. We’re going with both.

With the brand being so big in Asia, the whole strategy is that anyone who wants a Maxxis tyre gets one, and it’s making sure that all the dealers have the ability to buy Maxxis tyres.

We’re also always interested in grassroots sponsorships. We like to help the younger people coming through. The emerging, young athletes. We just try to sponsor key people in the industries on which our products are focused. We actually have a meeting with a relatively new cycle team next week… they’re female riders. I would love to sponsor even more female riders. It’s not that we don’t choose to – we need them to show themselves! So, we’re growing the brand that way. Sponsorships make it more visible.

We’ve also got an advertising strategy with consumers, and online. We work with the main B2C magazine titles, so as to show the dealer network that we’re pushing people to the brands. I don’t believe in expecting the IBDs to do all the work – it’s a mutual relationship and we should both be supporting them.

SR: One of the bits that we’ve discussed is when people have been on another brand of tyre for whatever reason, we’ll go out give them a tyre to try. We’re looking at working with some of the IBDs, giving them the opportunity to give a tyre to a customer to use, and let them see for themselves that it’s as good as we say it is.

Client relations are at the heart of your company – how do you maintain your customer-base?

DM: Our UK customer base is basically maintained through Extra, but we do try to make the end consumer aware of the product that drives them into the IBD.

AC: Our meetings with Extra are crucial, because we really respect our IBDs. All our messaging comes through Extra.

DM: So, we like to say that we’re the biggest tyre company you
don’t know.

The majority of our tyres are at the premium end, but it doesn’t matter if the consumer is an enthusiast or a pro, they all want the best. It’s hard to say that we always aim for a premium-end customer. Our ethos is “a customer for life”. We start with push-chairs, moving onto cycle tyres – if you just want to ride up and down the road, or get a bit more professional, we’ve got that too. Within the same range, we cover all the categories. From there we move up to scooter, car, and then wheelchair.

It comes from the top – if you don’t make money with Maxxis, I want to know about it, and we’ll take care of that. We want to give all of our customers – whichever point in the chain – value for money. We recognise that a shop needs to make profit, and that a customer wants good value for money. So it’s about making sure that everybody in the chain is getting what they need.

AC: We’re also working on communication with the IBDs, who have never had direct contact with us. With motorcycles and cars it’s the opposite. That’s not to push the sales, but to let them know what we’re doing, and how they can use what we’re doing to sell and push the brand. My angle on it is trying to make sure that IBDs are informed, so they know that the brand is here to work with them.

At the moment we’re working on a new POS. There will be display stands to increase the presence in the shops and inform them more about our range. One of the things that is being communicated back to us that our range is extremely complicated in terms of pricing. To communicate the difference in quality so a consumer understands it is really difficult. If you put the search term “Maxxis tyre” into Google, you can find them at different price points, but they’re just not the same. We want to dispel confusion for the consumer.

What did you use your time at the Cycle Show for?

SR: It wasn’t really about launches. We generally launch at Taipei and Eurobike, and a little bit at Interbike. The Cycle Show was more about education than product launches. Our goal over the next five years is to inform people of the fact that we’re not just a MTB brand – we’re a multi-brand. At the Cycle Show, we had the whole range, and the contact with the end consumer and IBDs. Wherever we go, people say they don’t know we cover more than MTB, but we’ve actually got one of the biggest ranges in the world. The road tyre is just as good as the MTB, or the BMX – everything is at the same level.

DM: I would challenge anybody to say they make more tyres than us. We make over one million per day. That’s about 100,000 per day just in cycling. If you look at the bicycle, we have two proving grounds.

Almost all the factories we have are in Asia. That’s where all the raw material is. The world’s natural rubber comes out of Malaysia and Thailand, so we were lucky that we were formed in an area nearby – it minimises shipping costs. If people ship rubber to other parts of the world, it becomes a lot more expensive.

Tell me about your research and development – what kind of work are you putting into these areas?

DM: It’s actually the key to everything we do – the pinnacle thing. Years ago, we had discussions with the head of R&D. He said we couldn’t make a certain tyre, and I said we could. We just need to get the best material, best processes.

We always strive to be ten per cent better than the competitor – whatever we do, if we come out with something. Unless we can podium, we won’t release the product. The engineers will spend time across different projects, and they learn from these areas. For example, when you look at bicycle and motorcycle tyres, the technology is pretty similar. The bicycle tyres are actually more technologically advanced.

With car tyres in this country, people don’t research the tech specification. They tend to just walk into a garage, unless they’ve got real brand loyalty. On the other hand, the UK cycle community will look at technical specifications, structure, and performance. The pursuit of excellence has been picked up by the cyclist. We’re still building towards that in the car.

What’s in the pipeline?

SR: We’ve got a new wide trail tyre coming out. The market has seen a growth in the wider tyres. The wide trail is designed to work specially with an internal rim of 33mm or wider. It comes with 26-28mm internal rim. The standard tyre will have a round profile, so you go from a 26mm to a 35mm. If you fit a standard tyre to a wider rim, you lose the profile of the tyre and it becomes very flat, and you lose all the performance. This is where our wide trail tyre comes in. It’s designed with a wider volume to allow space for the rim. We launched our first wide trail-specific tyre in Taipei Cycle, and the second at Eurobike.