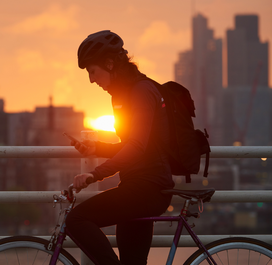 Strava is inviting cyclists to join the second annual Global Bike to Work Day Challenge on Thursday, May 11th May 2017.

Strava athletes can join the challenge here in a bid to make a difference as a worldwide movement of cyclists on one single day. The hashtag #CommutesCount can be used on other social media channels in support of a better future for cycling.

Strava Metro aggregates the millions of human-powered commutes uploaded to Strava every week. Strava then partners with urban planners to improve city infrastructure for cyclists and pedestrians. To date, 160 million people already live in a city where Strava Metro partners with organisations and government agencies to make commuting better, including London, Los Angeles, Sydney, Oslo, Glasgow, Calgary and Portland.

Strava Insights for the UK show that in 2016 an average of 223,376 commutes were uploaded to Strava every week, with cyclists logging an average distance of 13.5km and an average of 35 minutes in the saddle. Last year, the first-ever Strava Challenge to ride to work saw a total of 79,879 cycling commute activities logged on Strava across 180 countries As a result, 514.51 tons of carbon emissions were offset on the day.

Director of local marketing Simon Klima commented: "Every time you commute on Strava, you can make a difference. The Strava community can show urban planners how to improve infrastructure for your local area. Last year, Strava members who joined our first-ever Global Bike to Work Challenge recorded nearly 80,000 commutes in a single day across the globe. By hosting this Challenge for the second year, we hope to see an even greater movement of cyclists take to the roads. We want to continue to show our commitment and give back to the worldwide community, aiming to make our towns and cities better.”