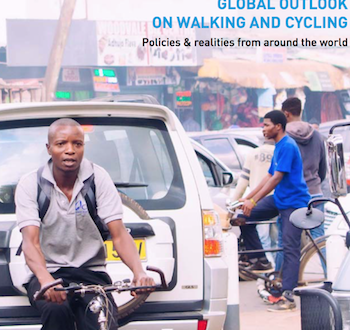 A report from the United Nations calls on national governments to seriously increase their spend on active travel, if they wish to save lives and have a healthier populace. The report suggests that 20 percent of transport budgets should go to walking and cycling.

Erick Solheim, executive director, UN Environment, said: "Scaling up that kind of change starts by deciding to take the first step, which can be as simple as creating a cycling and walking policy."

"Global outlook on walking and cycling" looks at ideas from around the world, including the policies for decision makers and the realities for citizens, to show what really works.

"I hope this report will inspire decision makers from across the public and private sector to explore where they live and work on foot and on two wheels."

The report has a four-point plan for governments to follow:

"For as long as NMT is seen as a low-status alternative, it will not receive the road space, budgets and attention it deserves," said Solheim.

He added: "Don’t try to replicate what other cities or countries do without taking your local context into account."

The Monterey Bay region of California, which is the regional planning area for San Benito, Monterey and Santa Cruz Counties, spends 9 percent of its transport budget on cycling (and walking), as does Edinburgh in Scotland.

Share
Previous Haibike becomes first e-bike sponsor of the Sea Otter Classic
Next Tandem Group lays off staff; Brexit likely to be part of the backstory