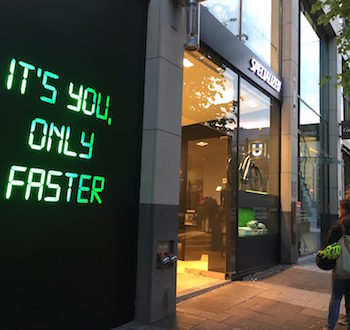 Specialized has this evening opened a pop-up store in Düsseldorf, Germany, the start city for this year’s Tour de France. The 4,000 square-foot pop-up is next to a Cartier store, with other luxe retailers nearby. The former suit store is on Stein Strasse, just off the Königsallee, the city’s upscale shopping street, and which is one of the promendades the Tour de France riders will use – twice – during the Grand Depart in July.

The Californian company has taken out a short-term lease on the premises, and earlier in the week hosted local Specialized dealers to tour the two-floor store.

Nearer the time of the Tour the store will be merchandised with road bikes but, for the next six weeks, it is stocked with the brand’s new ebike the urban-focused Vado, with a smaller displays of the Levo e-MTB, too.

The store is also stocked with Specialized’s urban and MTB apparel – much of which is usually not available in Germany – and Düsseldorf-specific t-shirts, water bottles and other paraphenalia. The "Ride Düsseldorf" motif used on the soft goods features a Strava-style heat-map of the city’s most used cycleways, some of which are new and installed to celebrate the arrival of the Tour de France.

Donny Perry, senior manager of retail development at Specialized and who merchandised the store including kitting it out with bespoke modular freestanding retail units, said he didn’t expect the store to sell many of the bikes. The pop-up features a lounge area for launches and a supersize screen, but it has no service area.

Perry said that Düsseldorf is one of the key German cities seeing a spike in e-bike use and that being able to secure a downtown retail location during the run-up to the arrival of the Tour was a "perfect storm of events." (He has been visiting the city on and off a great deal over the last few months.)

He added: “We want to meet the excitement head on by building a space where anyone can learn more about Specialized, our heritage and our products.”

Audio interviews of Donny Perry – on the pop-up and the future for bike retail – and Specialized Turbo brand manager Dominik Geyer – on the Vado launch – will be available next week.

The Specialized crew at the opening of the pop-up