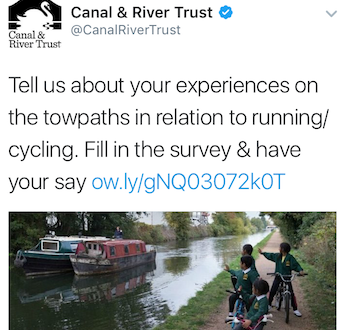 Should towpath racers be slowed down by speed bumps, asks canal org

The Canal and River Trust is running a prize survey to find out views on those who travel too fast on towpaths, perhaps using Strava and other tracking apps.

The survey is seeking to find out "as much as possible about what you think of our towpaths and our plans to make them better as this will help ensure they are as good as they can be."

Towpaths are shared spaces with a pedestrian priority but in some high use locations there has been friction between fast cyclists and slow cyclists, and between fast cyclists and pedestrians. Speed bumps and chicanes have been introduced in some locations, and the Canal and River Trust is looking to find out if there would be public acceptance for more of these speed reduction measures.

The Trust already has a "Share the Space, Drop your Pace" campaign to "encourage everyone to be nicer to each other on towpaths."

The charity’s survey stresses: "We love cycling and running on towpaths – and these activities will always be welcomed – but we know that some people don’t always use common sense and travel too fast. This can obviously be dangerous and can, occasionally, cause accidents."

There is no speed limit that cyclists have to stick to on towpaths (nor is there one on public roads, speed limits are for motor vehicles only) and the Canal and River Trust’s survey says:

"There isn’t any evidence to say that an unenforced speed limit would be treated as a ‘good guide’ for moderating pace but there is a school of thought that if there was a limit some visitors might treat this as a ‘speed they are entitled to do’ which would be wrong indeed. Not all towpaths are the same, so it wouldn’t be possible to have one limit which would suit all locations at all times."

The survey asks whether cyclists use Strava on their smartphones, and asks why they may speed. Could it be because they are "Trying to beat a certain time for my journey" or that there are "Long, straight stretches of towpath."

"We all know if we’re going too fast," the charity suggests because of a "combination of common sense and fear tends to let us know this."

How would a cyclist (or runner) know they’re travelling too fast? There are tick-boxes:

"Whilst we know [chicanes] can help to stop fast movement at that specific location, cyclists sometimes accelerate again after the chicane," states the charity, asking whether "there should be more of these, regardless of the access issues they cause, adding "I think they send a clear message to cyclists on the speed they should travel."