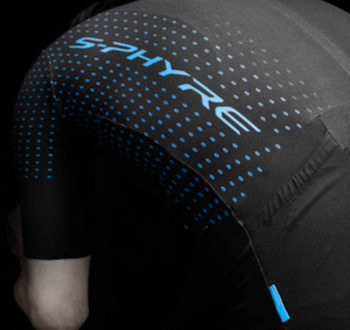 Shimano announced the S-Phyre performance cycling footwear in 2016, has now extended the brand into high-end cycle clothing. The performance brand sets a "new benchmark in the company ́s clothing performance," says a statement from Shimano Europre.

S-Phyre clothing – comprising jerseys, bib shorts, skinsuits, gloves and socks – is aero-tested and aims to maximize power transmission by delivering more performance per gram. According to Shimano Europe deputy director of softgoods Marco Zaja it is "engineered to limit these losses through technological advancements, applying linkage and movement principles in a complete system between the bike, the body and the motion of its muscles."

The jersey, available in black or yellow, features seamless shoulders with a 3D construction to reduce shoulder wrinkles. Bib shorts feature a shock-absorbing winged chamois, integrated woven leg-grippers, and inner-thigh high-thread count weave patterns for "zero-loss interface between the saddle and the garment."

The spring/summer glove is an aerodynamic extension of the jersey, said to minimise drag with a pull-on design for less bulk on the wrist.

The S-Phyre socks were released in 2016 along with S-Phyre footwear. (Marrying the socks and shoes is claimed to gift the rider 2.7 more watts.)

World Tour team LottoNL-Jumbo will race in S-Phyre custom clothing and footwear this year, and will work with Shimano on further product developments.

The S-Phyre clothing line is available from mid-February.