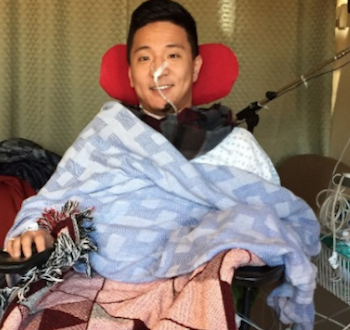 GT’s digital marketing manager Andrew Cho has been left paralysed after the rupturing of a blood vessel in his back. The former pro rider is currently in hospital; a GoFundMe crowdfunder has been started to help raise cash for his rehabilitation.

Canada-based Cho was at a dinner with friends on 6th January when he started to experience dizziness along with numbness in his neck and outer limbs. Once back home he collapsed – he burst a blood vessel in his C3 and C4 vertebrae – but he was able to inch to his phone and, after a number of attempts, used his tongue to wake Siri which alerted the emergency services.

Following surgery Cho has regained limited mobility and now has feeling down to his biceps. Medics say he has a long road to recovery. It’s expected he will be unable to work for at least a year. Although Cho is covered by insurance and is being cared for via the Canadian health service – which isn’t as draconian as the US health system – there will still be significant costs going forward, hence the GoFundMe campaign. This was started yesterday with a CAD$75,000 goal and has already generared in excees of $80,000.