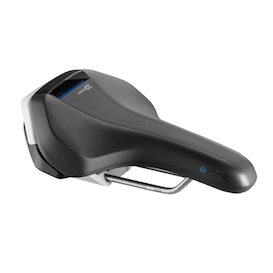 The new model, which the brand claims is the first saddle on the market specifically designed for commuter, leisure, touring, off-road and urban e-bikes, is the result of the first comprehensive study of e-bike users that Selle Royal conducted in collaboration with world leading designers at BMW Group subsidiary Designworks. The study identified a number of performance characteristics from e-bike users that could benefit from an e-bike-specific saddle design.

Selle Royal will be presenting the new eZone saddle first at Eurobike later this month at the Selle Royal Group stand – A5-301.

eZone uses patented technology and has a range of e-bike-specific features such as eFit Design, an elevated rear section to prevent backward sliding and shorter nose to aid in mounting, Acceleration Control, a zonal design to enhance control and balance for added safety during acceleration, and eGrip, a fibreglass integrated handle for easy manoeuvring. The saddle is padded with 3D Skingel, a tri-dimensional gel structure that reduces pressure peaks by up to 40 per cent
For the new design, the designers raised the rear portion of the saddle and added wings with which the rider can steer and adapt thrust with precision. To ensure comfort, the wings are made to flex, supported by rubber inserts, for greater feel and tractability.

Selle Royal marketing manager Lara Cunico said:“The big discovery of the research conducted with Designworks is that the characteristics of e-bikes are really unique, almost incomparable to those of non-electric bikes. This led us to re-think our product in its entirety. We pushed the realms of expertise in the industry to develop a completely new type of saddle, different from any other product in the market. eZone is the outcome of an amazing project… and this is just the beginning.”