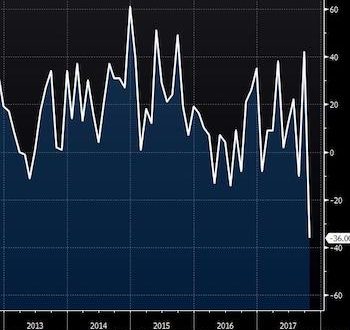 Retail sales and employment both tumble

The UK retail sector is feeling the pinch as Brexit starts to bite – retail sales are at their lowest since the height of the last recession in 2009, and there has been a record fall in retail employment.

Half of Britain’s largest retailers have reported falling sales, with just 15 percent reporting rising sales. This is according to CBI’s monthly survey of the UK retail sector. That gives a rounded balance of -36 percent, the worst reading since March 2009.

“It’s clear retailers are beginning to really feel the pinch from higher inflation. While retail sales can be volatile from month to month, the steep drop in sales in October echoes other recent data pointing to a marked softening in consumer demand."

In the year to October, retail sales fell at the fastest pace since March 2009. #CBI_DTS https://t.co/yjqQVx5Stl pic.twitter.com/D023jErcg3

Meanwhile, there has also been a record fall in retail employment as both jobs and hours have been cut. According to the BRC Retail Employment Monitor, retail employment fell at the steepest rate in almost a decade over the three months to September.

Hours worked in the retail sector, and the number of employees both fell over the period.

Retail Week reports that in the fourth quarter, the peak trading period for retailers, employment levels are expected to pick up again.