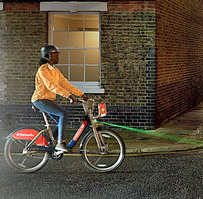 London’s cycle hire scheme has enjoyed a record-breaking start to 2017 with more than 600,000 journeys made in January.

The 638,491 hires last month beats last year’s January record of 586,325 and follows a record-breaking 2016. Last year an unprecedented 10.3 million hires were recorded using Santander Cycles. This equates to a 4.4 per cent increase on 2015.

Since the scheme was launched in July 2010, there have been more than 56 million recorded journeys on Santander Bikes.

Amongst the improvements made to the popular scheme last year was the introduction of Blaze Laserlights to all 11,500 bikes; a new Santander Cycles Business Accounts scheme was also added, whilst more bikes and docking stations were added including the extremely popular Queen Elizabeth Olympic Park hub.

A range of cycling activities also aided the growth, with Spin Up classes at iconic locations across London, online how-to films starring Jenson Button and Jessica Ennis Hill’S women’s ride along the East-to-West Cycle Superhighway all engaged the public and inspired countless rides.

Mayor of London Sadiq Khan commented: “I’m delighted that record numbers of Londoners are using our world-famous Santander Cycles to travel around the capital. Cycling helps to improve our health, air quality and congestion, and that’s why I’m investing record amounts to make it even safer and easier for all Londoners to take to two wheels.”

TfL’s general manager responsible for Santander Cycles Paul Cowperthwaite added: “Last year was a remarkable success for Santander Cycles, with new records being set for the busiest weekend, month and year. And this year will also be an exciting one as new lighter, more manoeuvrable bikes will be released to encourage even more people to have a go and widen the appeal of the scheme even further.”

Santander chief marketing officer Keith Moor also added: “The Santander Cycles Scheme is a great example of our commitment to supporting local communities and helping people and businesses prosper. Through the partnership with TfL we wanted to bring excitement and innovation to the scheme, whilst making it more accessible, enjoyable and giving people more confidence to cycle around this remarkable city. It’s been great to see records broken and hires on an upward trend and we look forward to announcing more exciting plans in 2017.”