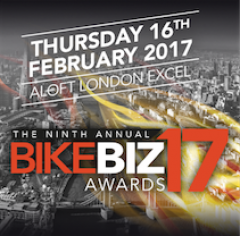 Cycling UK announced as charity partner at the BikeBiz Awards

Cycling advocacy and charitable organisation Cycling UK will act as charity partner at the 2017 BikeBiz Awards.

The company has championed the cause of cycling for well over a centaury, whilst promoting all forms of the sport and protecting the interests of riders from all age groups and demographics.

As an independent democratic organisation, Cycling UK’s activities reflect the commitment of its members, volunteers and partners to make a lasting difference to the lives of individuals and communities.

Now in their ninth year, the BikeBiz Awards celebrate the UK cycle industry and the people and companies whose hard work behind the scenes keeps the cycle world’s wheels turning.

Set during the London Bike Show, the event takes place on Thursday 16th February 2017 and will feature retail prizes to honour high achieving chain stores, local independent shops and giant online retailers, awards for the distributors and wholesalers, accolades for the brands themselves and also for those providing essential services to the industry, from training to advocacy and beyond.

Just as importantly, the BikeBiz Awards night is a chance for the trade to hob nob, chat with rivals and make new business contacts. Being hosted during the London Bike show makes attendance ideal for exhibitors who have had a hard day setting up their stands as well as for attendees of the show who will be staying in the vicinity.