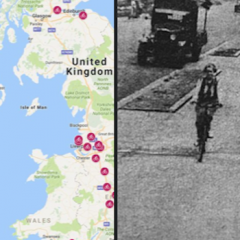 The campaign, which was started by BikeBiz executive editor Carlton Reid, has exceeded its initial funding target of £7,000 with over 20 days to go.

Speaking to BikeBiz, Reid commented on the campaign’s success: “The campaign met its target, but that’s just the start. There are another three weeks to go, and the more pledges we get the more leverage we’ll have with local and national organisations that have the means to bring these cycleways back to life.

“More corporate backing of the project would also be welcome; Showers Pass of Portland, Oregon, is our first. So, an American company has spotted the potential of this project but not yet any British ones. “

The current funding total stands at over £9,000 with backing from 306 individuals. For our full story on the aims behind the campaign and for information on how to get involved, click here. To visit the project’s Kickstarter page, click here.