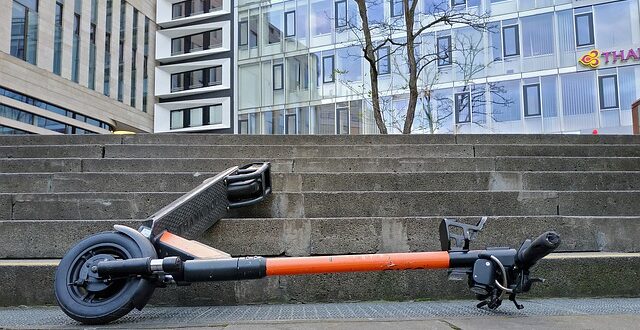 How will bike shops be impacted by the sale of e-scooters? (Picture: @Borismayer77)

The sale of private use e-scooters remains a topic of discussion in the cycle industry, as retailers weigh up the potential profits against legal difficulties for consumers.

Under current UK law, privately owned electric scooters are banned on the roads, as the Government is holding trials for scooter-share schemes across the country before updating legislation.

While the trials of app-based scooter rental have proved hugely popular up and down the country, consumers are continuing to buy private-use scooters, which are available from retail giants like Halfords, Decathlon and GoOutdoors, and specialist stores like Pure Electric.

But what does the cycle trade have to say about the sale of e-scooters? BikeBiz asked its readers to share their thoughts.

The consensus from our informal questionnaire is that independent bike dealers are reluctant to sell the machines to customers until the Government legislation catches up.

Sharing their thoughts on e-scooter sales, a Giant dealer in London, who didn’t share their name, said: “In a word, problematic.

“As long as the legal status of e-scooters is unclear I wouldn’t be happy investing in stock to sell on a ‘nod and a wink’ basis to customers.

“Whether or not the ‘big players’ like Halfords and Pure Electric have the influence to overcome what looks like pretty poor perception of e-scooters with the public remains to be seen, and if they do and sales increase I tend to think more on the road (or pavement!) won’t see the reputation of e-scooters improve.”

They also said they believed there are potential sales to be gained if they did choose to sell e-scooters, but that even if legalised they wouldn’t see private scooters an area for large investment in stock.

The dealer added: “I did consider [selling e-scooters] and to be honest I decided not to based the fact that the brand I was offered was already being discounted. I’m in two minds now, geographically it would make sense but I’m not convinced there’s a demand from our demographic.”

“I think the legal position needs to be clarified.”

Their thoughts were echoed by an independent bike shop in the seaside town of Bognor Regis in West Sussex, who said they did not want to sell the machines on moral grounds.

They said: “I don’t want to promote something which makes people lazy and is dangerous.  They are not an active travel solution, as the data from the trials already shows that the majority of users are switching from walking and cycling rather than car use.  They are dangerous to pedestrians if used on pavements and dangerous to road users if used on the road.

“I’m sure there’s money to be made selling them, but from a moral point of view, I would not want to benefit from them.”

One staff member from a e-scooter-specific retailer in Edinburgh said they believed it was fine to sell the machines, but “customers must be made aware of the current legality.”

However one South London e-bike retailer said they considered the sale of electric scooters “irresponsible”.

In terms of potential sales, BikeBiz readers appear to be divided on the issue, as one East Sussex bike retailer said they believed there was a potential boost in sales and repairs.

But this was disputed by an IBD in Telford: “[They wouldn’t impact our business] to any great extent as they do not suit our business model.

“We expect they will be more of a commodity sold at a discounted price. There is little in the way of follow-up servicing to make it worthwhile stocking.”