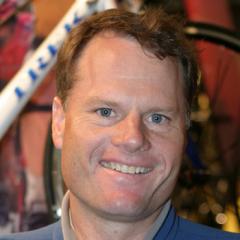 The $1-bn Trek Bicycle Corporation is a family owned business, founded by John Burke’s father in 1976. The company manufactures some high-end bikes in its Wisconson factory but, like the rest of the US bicycle industry, it is heavily reliant on Asian imports.

"We’re 100 days in and [Trump] finally comes out with a tax plan – and it was 250 words? And there was no bad news," Burke said. "Here’s this huge opportunity to simplify everything and to have massive change, and you get 250 words."

Burke describes himself as neither a Democrat nor a Republican, "I am just someone who cares about the future of our country," he said last year. He is the author of "12 Simple Solutions to Save America," published in 2016, which "challenges Americans to resist the status quo and change what elected officials are unwilling or unable to change."

Burke agrees that American corporate taxes should be reduced, but then so should all the deductions.

"We’re 19 trillion frickin dollars in debt and everybody got a treat. And I just go, ‘You’re kidding me.’ You call that leadership? I don’t."

Burke also slammed into Trump on his supposed leadership skills.

"When you’re the president of the United States and you come out with this ‘American First’ theory, what are you saying to the rest of the world?

"I’ve been so fortunate here in growing the business. When I started here, we were doing $16 million and now we do over a billion dollars, and I’ve worked with an incredible team to do that. We took the business from just being in the US to right now – 60 percent of our business is around the world.

"And one of the reasons why American is as strong as it is, is there are a lot of great American companies who have access to markets all around the world — General Electric, Coca-Cola, Apple, Trek, Harley-Davidson.

Burke stressed: "The whole ‘American First’ thing … I just don’t find that conducive to America’s future or anyone else in the world."

He added: "We’re a leader in the world, but to maintain that status over the long haul, you actually need a leader who can look at the people and say, ‘You know, we’ve got problems here’ — and whether your talking about tax codes, gun control, nuclear proliferation, big issues — ‘Here are the problems, and here are the solutions, and this is why we need to do it.’

While Burke says he is politically neutral his sister, Mary Burke, a former Trek executive, was the Democratic candidate for Governor of Wisconsin in 2014.

Burke is known for his strong views. Since 2007 he has been lambasting the global bicycle industry for its lack of support for cycle advocacy. He gave a famous talk at the Taipei International Cycle Show in that year urging fellow industry leaders to do more for advocacy as it would ultimately lead to more profits.

In talks at trade shows Burke often asks how many of his fellow industry leaders are "actively involved in creating a more bicycle friendly world."