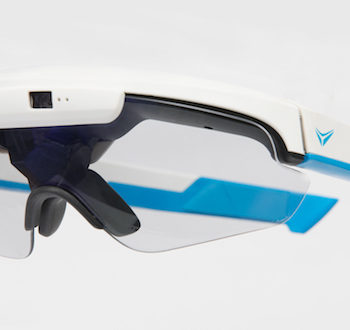 BikeBiz trialled the technology in June, and now prices and availability have been revealed for the Everysight Raptor augmented reality sunglasses.

Beginning today, pre-order "invites" are being taken on the Everysight website. Distribution of US invites will begin November 15th and recipients can immediately pre-order their Raptor at the early adopter price of $499 for the 16GB and $549 for the 32GB. Shipments will begin in February 2018.

Due to regulatory approval processes, registrants in the UK and EU will receive invitations in January 2018, and will be able to pre-order Raptors at the early adopter price, with shipments beginning in April 2018. The prices are £379 and £417 respectively.

BikeBiz first featured the AR sunglasses in 2015. The Israeli company behind the glasses makes head-up displays for fighter jets.

Raptor looks and feels like traditional cycling eyewear, but with hidden technology – riders can choose to view key metrics in their vision while they ride (one eye only); metrics such as speed, heart rate, and wattage. Perhaps the most impressive feature of the glasses is the in-vision turn by turn navigation with scrollable map.

Of note for urban warriors the glasses also feature a look-and-shoot camera that captures video or stills via voice commands. Get cut-up on a corner? Wake the on-board camera on your glasses with a shout and you’re shooting video of the perp.

All captured information will upload to Everysight’s smartphone app. Output what you saw on your ride to social media, or to a coach – and all overlaid with the key metrics of your choosing.

In just a short time you start not to focus on the projected information, but know it’s there when you need it. As the projection – Everysight calls this "Beam technology – is into one eye only it’s easy to focus away from it.

There’s an optional control unit for the handlebars and iders with prescription lenses will have the option to purchase RX frames. Everysight also offer dark and light-tinted lenses for different riding conditions.

Other companies with AR technology for cycling include WaveOptics, a UK startup which has raised £12m in Series B funding. The Oxfordshire-based company uses cycling to promote how its "waveguide-based optics" will be used in the real world. This is tech based on hologram physics and photonic crystals.

Using the point-of-view of a road cyclist WaveOptics shows an augmented-reality journey starting with a virtual look at the bike’s tyres before the cyclist is given turn-by-turn navigation while riding.