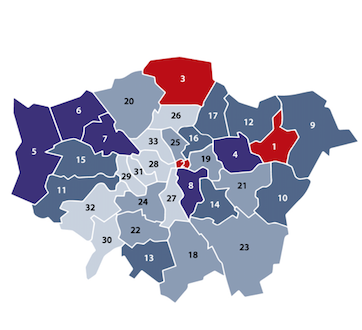 Millions of Brits are ‘insufficiently active’, according to new study

An estimated 8.3 million men and 11.8 million women across the UK are categorised as ‘insufficiently active’, according to the British Heart Foundation.

Considering the yearly financial burden of physical inactivity at an estimated cost of £1.2 billion on healthcare services, Sport England has commented that it believes continual sport participation can save between £1,750 – £6,900 per person in healthcare costs.

Sports retail site GolfSupport.com analysed information from the London Datastore to reveal what percentage of the population in each of London’s 33 boroughs do not play or participate in any sports.

The research revealed Barking and Dagenhamwas the worst London borough for inactivity, as 67 per centof residents do not participate in any sports whatsoever. Barking and Dagenham was closely followed by the City of London, where 61.9 per cent of the population do not take part in any sports.The third worst borough was Enfield,where 60 per cent of residents do not undertake any sporting activities.

On the other end of the scale, Camden is London’s most active boroughwith only 35.7 per cent of residents not participating in any sports. Slightly above and less committed to being active, is Richmond upon Thames, where 41.8 per centof the population does not indulge in any sport.