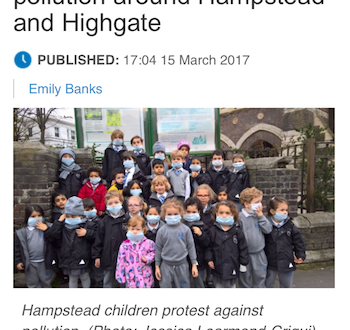 "Schoolchildren and parents staged a protest against the pollution around schools throughout Hampstead and Highgate which they claim is choking them to death," reports a local newspaper in London. A photograph supplied by one of the parents shows the kids in face-masks. So, the story is about air pollution caused by school-run parents in their people-carriers? Nope. Cyclists.

"Donning face masks, they called on London mayor Sadiq Khan to intervene to stop the Cycle Superhighway 11," continued the Ham & High. (The parents are also opposed to HS2 and the building work taking place on a local hospital.)

Employment lawyer Jessica Learmond-Criqui, who coordinated the protest, said: “Hampstead is already bad and in excess of safe NO2 levels for adults and kids. The readings are off the scale.

“Why is the mayor encouraging TfL to force up to 475 extra cars per hour into some of our narrowest residential side roads?”

She added: “While we support cycling, CS11 in its current form is not right for our area. I would invite the mayor to reach out to community leaders and give them the support they need to come up with a safe scheme for cyclists but which won’t increase the toxicity on the young and old lungs in our area."

Last year Learmond-Criqui was the leader of a crowdfunding drive to raise £150,000 for a judicial review of CS11, which claimed that it would “act as a cork” to traffic, diverting motorists onto leafy residential roads.

This is latest in a growing number of cyclists-cause-air-pollution news stories. Last week Michael Gove MP asked London mayor Sadiq Khan “do you think that we might more easily be able to meet the very welcome things on air quality, if we were to revisit exactly how the provision of bike lanes has been implemented?”

And he has not been the only Tory MP suggesting that removing cycleways is the way to decrease London’s illegal air quality. Earlier this month Sir Greg Knight said:

"Is there not a case … for making local authorities take into account the congestion effects of their crusade to remove road space in favour of wider pavements and more cycle lanes? [Pollution] is going up because pavements have got wider and road space is being turned over to cycle lanes. If [the Mayor of London] wishes to reduce air pollution, he and others need to take care when they are seeking to remove highway lanes."

(Knight is chair of the all-party parliamentary historic vehicles group and the owner of a number of historic vehicles, including a 1972 Jensen Interceptor. This British classic has a 7.2 litre engine and is famously thirsty for petrol, and quite the polluter.)

And last month, during an air quality debate in the House of Lords, Lord Tebbit claimed the "cause of the excess nitrous oxide in the air in this area of Westminster and along the Embankment is those wretched [cycleway] barricades which have been put up by the former mayor.”

What Tory MPs – and school-run mums – don’t ever seem to blame is the increased levels of motor traffic due to a range of factors including internet deliveries. Westminster Council has found that just a single address on Baker Street has been getting 100 separate Amazon deliveries per day.

And far from causing congestion, one US study has shown that motor vehicle speeds were increased on those road with cycleways.

As this video shot earlier today demonstrates, cyclists are very efficient users of space – imagine if this many cyclists were all in cars?