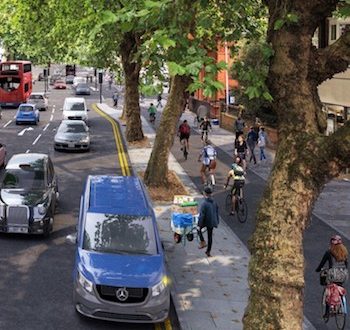 Sadiq Khan has today announced a consultation for a new kerb-protected cycle superhighway. The Mayor of London said that this new cycleway will bring safer cycling to west London.

Khan, said: “As the capital continues to grow, it is vital that we encourage more Londoners to walk and cycle to improve health, productivity and air quality. That’s why I’ve set out bold plans to change the way we look at how our transport network and committed record levels of investment to improve cycling. This new cycle superhighway will bring a high-quality segregated cycle lane to west London for the very first time. It will make a real difference in encouraging Londoners of all ages and abilities to get on their bikes and improve conditions for pedestrians across the area.”

Will Norman, London’s Walking and Cycling Commissioner, said: “Cycle Superhighway 9 will be hugely important in helping cyclists in the west travel safely and inspire many more Londoners to take up cycling for the first time. It also includes significant improvements for pedestrians that will make walking around the local area more appealing and encourage even more people to add both walking and cycling to their daily routines.”

Cycle Superhighway 9 will see roads transformed from Kensington Olympia to Brentford, making it safer to cycle and easier to cross roads in west London, while reducing through traffic on some residential roads.

The proposal includes safety makeovers for including Hammersmith Road, King Street, Chiswick High Road, Brentford High Street and Kew Bridge Road, and the ability for cyclists to bypass Hammersmith Gyratory and Kew Bridge Junction. Through traffic will be removed from residential roads Wellesley Road and Stile Hall Gardens, and there will be five new traffic light crossings and more than 20 upgraded pedestrian crossings.

London Cycling Campaign’s nfrastructure campaigner Simon Munk said: “LCC welcomes the Mayor’s plans for a new Cycle Superhighway in West London. This route will tame several dangerous junctions, enable far more people of all ages and abilities to cycle to local shops, stations and into work and extend the Cycle Superhighway network to areas where cycling demand is high but cycling infrastructure is virtually non-existent. It will help achieve the vision of a greener, healthier and less congested city set out in the Mayor’s Transport Strategy and is a big step by the Mayor towards fulfilling the commitment made to LCC members and supporters to triple the extent of protected space for cycling on main roads.”

Subject to the results of this consultation, Transport for London and partner boroughs aim to start building the cycle superhighway late next year. The consultation closes on 31st October.