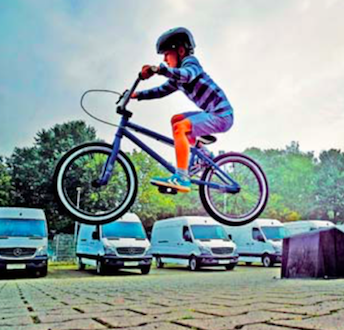 Today we enjoy a burgeoning children’s bike market and it’s hard to remember that just over a decade ago, most young riders had little choice than to ride heavy, ill-fitting bicycles.

Isla Rowntree – founder of Islabikes – changed all this just over ten years ago with an innovative focus on lightweight, proportionately designed children’s bikes. Islabikes took into account children’s body shapes and created size-specific models where everything from frames and brake levers, to crank lengths and lean-over angles was studied and specified to give children a better cycling experience. We’re proud to say that the effect of our approach didn’t only transform our customers pedalling lives, it also initiated an industry-wide revolution in children’s bikes. Now – quite aside from the other dedicated children’s bike brands that have sprung up – youth models from almost all quality cycle manufacturers have improved compared to what they were producing ten years ago.

Of course, some are better than others ­­– and it’s still not difficult to find almost criminally heavy, ill-fitting “bike-shaped objects” outside of the dedicated bike trade. However, for the most part children’s bikes are better-sized, easier to handle and lighter than ever.

Despite this sea change, only half the battle has been won. Children have the right equipment to cycle, but do they have the right opportunities? The problem now is, some parents feel uncomfortable allowing their children to take to busy modern roads where speed, impatience and a lack of courtesy seems to rule. Even the most hardened cycling evangelist has to recognise the potential dangers and justifiable fears. That is why we believe there needs to be a complete overhaul in dedicated and especially segregated on-road cycling facilities.

Just as Islabikes instigated a revolution in children’s bike design a decade ago, now we need more than ever a rethink at governmental level so that children across the UK can have safe and segregated cycle access to their schools as a right and everyday norm. Few cyclists have forgotten the initial joy of cycling: the ability to travel otherwise impossible distances and broaden horizons entirely under their own steam. Whether it is leaving the refuge of home each morning to ride to school, heading out with friends, or going to town at the weekend, that sense of independence is what makes cycling as a child so special.

The fact is, only once families feel safe to take to the roads on their bikes will we see the bike industry’s efforts really come to fruition.