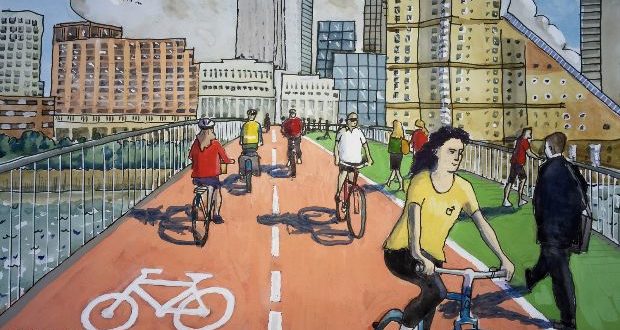 Plans for a new Thames walking and cycling crossing from Canary Wharf to Rotherhithe in London have been ‘paused’ due to rising costs. 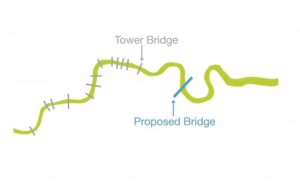 Sustrans back in 2008 proposed a walking and cycle bridge over the Thames to connect south-east London to the Docklands peninsular to make walking and cycling possible for thousands of commuters and residents.

Its subsequent feasibility study showed the bridge would lead to a ‘crucial’ new walking and cycling crossing and provide a ‘vital’ link across the east side of the river.

A spokesperson for the Mayor said: “While the Mayor is investing hundreds of millions of pounds enabling more walking and cycling in East London, the estimated cost of this project has now increased to around half a billion pounds.

“TfL has used all of its expertise to try and lower the costs of a viable new bridge at this site, but it would now cost substantially more than the money allocated in the Business Plan. Pausing work is now the sensible and responsible thing to do to protect the London taxpayer.

“TfL is now exploring options for a new fast ferry at the site that can be used by cyclists and pedestrians, and we continue to use the record amounts being invested in Healthy Streets to make walking and cycling easier and safer across the capital.”

Matt Winfield, London director at Sustrans, said: “We are hugely disappointed that the Rotherhithe to Canary Wharf bridge has been cancelled. With so much development planned for east London, it is essential that new walking and cycle crossings over the Thames are built so that it is easier for people to reach jobs and services using sustainable, clean modes of transportation.

“Cycling and walking are a vital part of the transport mix but not if we force people to share tunnels with motor traffic. London needs significant change to address the problems of air quality, fairness, congestion and health – the cancellation of this bridge takes exactly the opposite approach.”