PJA to hold webinar on £2 billion cycling and walking ‘revolution’

PJA is to hold a webinar tomorrow, 31st July, on the £2 billion cycling and walking ‘revolution’ announced earlier this week.

PJA’s chairman Phil Jones and Adrian Lord were key advisors on the plans launched this week by Prime Minister Boris Johnson. The active travel experts advised the Department of Transport (DfT) on how to design the thousands of miles of higher standard, protected cycle routes set to be built in towns and cities, which will be monitored by a new inspectorate called Active Travel England.

Jones also helped to author the strengthening of the Highway Code to better safeguard pedestrians and cyclists and improve legal protections for these vulnerable road users. The Gear Change plans have been launched by No.10 to boost cycling and walking in a bid to tackle health and environmental challenges, while building on the growing number of people taking up active travel during the pandemic.

Jones, Lord and Rachel Aldred, professor of transport at the University of Westminster, will be discussing the Government’s Gear Change plans in a webinar on Friday, 1-2.30pm. Pre-register here. 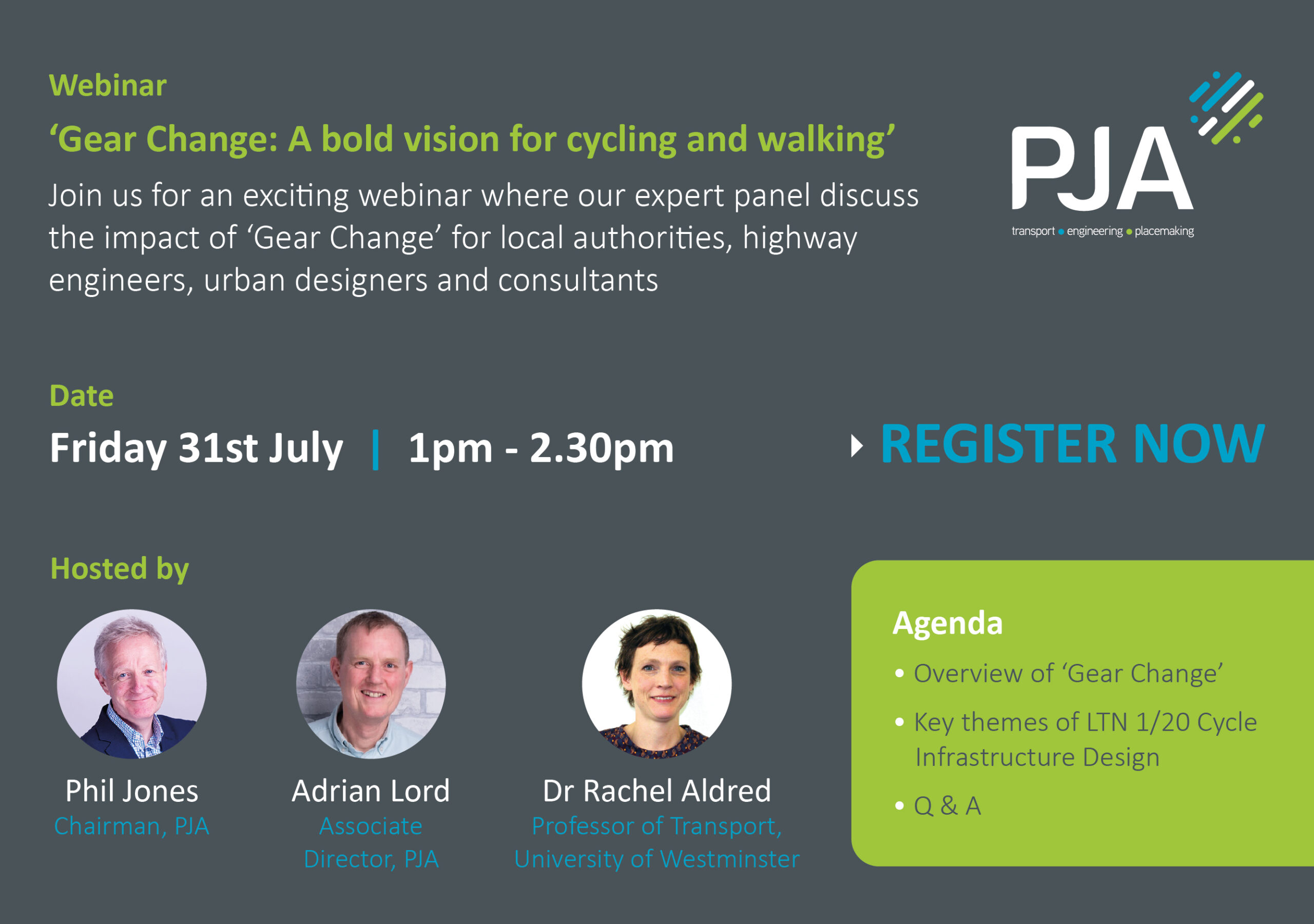 “The announcement of the cycling and walking revolution is very exciting news and we’re pleased to be playing our part,” said Jones. “Safer road conditions will encourage more people to cycle and walk, in turn reducing congestion, traffic noise and pollution while creating more liveable and friendly neighbourhoods.

“New clear design standards will also help bring consistency across the national road network. This will assist local authorities and highways engineers when designing roads and junctions, including in new developments.”

Jones and Lord made their recommendations for protected cycle routes and other types of high-quality infrastructure in Local Transport Note 1/20 Cycling Infrastructure which has been issued by the DfT. Jones voluntarily helped to draft the content for the Highway Code review for the Walking and Cycling Alliance of campaign groups with Roger Geffen MBE, director of policy at Cycling UK and Joe Irvin, former chief executive of Living Streets.

The review includes a rule that left-turning drivers must stop and give way to cyclists moving straight ahead at all junctions. It also includes another key concept developed by Jones, the Hierarchy of Road Users, which states road users in vehicles that can do the most harm in any situation have the most responsibility to take care – thereby making roads safer for people with disabilities, cyclists and pedestrians.