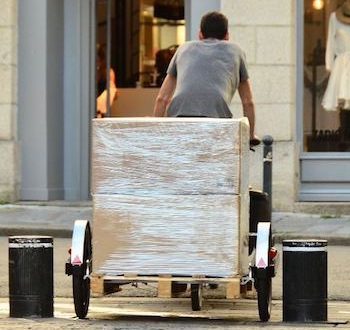 A video of a clever trailer which slides under a standard wooden pallet and hooks up with a bike is currently being widely shared on social media. The trailer is the BicyLift by FlexiModal of France – it can lift and transport a packaged load based on the widely used Euro pallet size. The trailer was designed by mechanical engineer and industrial designer Charles Levillain.

FlexiModal is based in Rennes, France. A number of European "last mile" courier companies are already working with the BicyLift, and Breakaway Courier of New York City also has one.

The design is patented in France and protected all around the world through the Patent Cooperation Treaty.

The BicyLift can be transport by bike or by hand – its harness system allows the trailer to be attached or released with one movement, using a single hand. Euro pallets, which measure 120x80cm, are lifted by a fixed fork that is slid under the pallet.