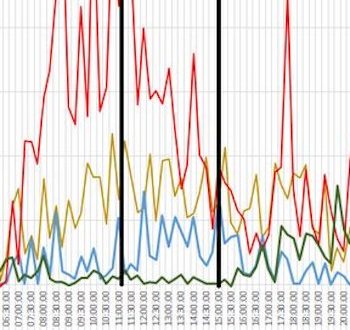 As well as generating a lot of smiles a city cycling event staged last Sunday resulted in a dramatic drop in air pollution. Why? Motor vehicles were banned.

Air-quality monitoring equipment picked up the massive drop in noxious air when cyclists on the HSBC British Cycling City Ride took over from cars on a five-mile circuit in Newcastle city centre. Roads often clogged with motors belching out poisonous exhaust gases were, instead, quiet, clean and fume-free.

A graph produced by Newcastle University’s Urban Observatory shows the drop in noxious air during the staging of the city centre ride. Monitoring equipment operated by the Geospatial Engineering Group at the university’s Civil Engineering and Geosciences department plotted the falling away of air pollution as barriers were erected to prevent motorists from entering much of the city centre. (Similar results can be seen from the air-quality monitors in the early hours of the morning – with motorists in bed their only noxious emissions are personal and generally duvet-capped.)

Tom Komar, of Sustrans’ transport modelling team, said the graph showed how "a cycling event temporarily improved air quality" and that this "proves the benefits of active travel" for the health of cities and the indivuduals who inhabit them.